Clear Linux, the Intel developed GNU/Linux distribution optimized for Intel processors and particularly suited for containerized applications, recently has made progress in developing the OS to make it usable as a desktop OS in addition to its capabilities as a cloud, server, and container platform. Unfortunately for desktop GNU/Linux users that mulit-boot, it has not made enough progress such that installation is a trivial task, as it is with other established Linux distributions even for complicated setups in regard to partitioning and allocating partitions to be used for the installation.

In my initial attempt to install ClearLinux version 28020 on bare metal I encountered two complications:

This is not necessary in other distributions whether they have a GUI installer or not, and will simply format the partitions -- if specified -- and assign them to a specified mount point, while other existing partitions on the system not not selected as the targets for installation are left untouched. This limitation may be because of Clear Linux's evolution from a its roots as a specialized platform where only a single filesystem is necessary, such as for containerized applications.

The Clear Linux documentation does state that the Clear Linux must be the first OS installed on a computer, without detailing the nature of the requirement -- not mentioning the limitations mentioned above. When I browsed the documentation, I assumed that it was simply because the CLear Linux installation would only overwrite the EFI System Partition, not the entire disk. 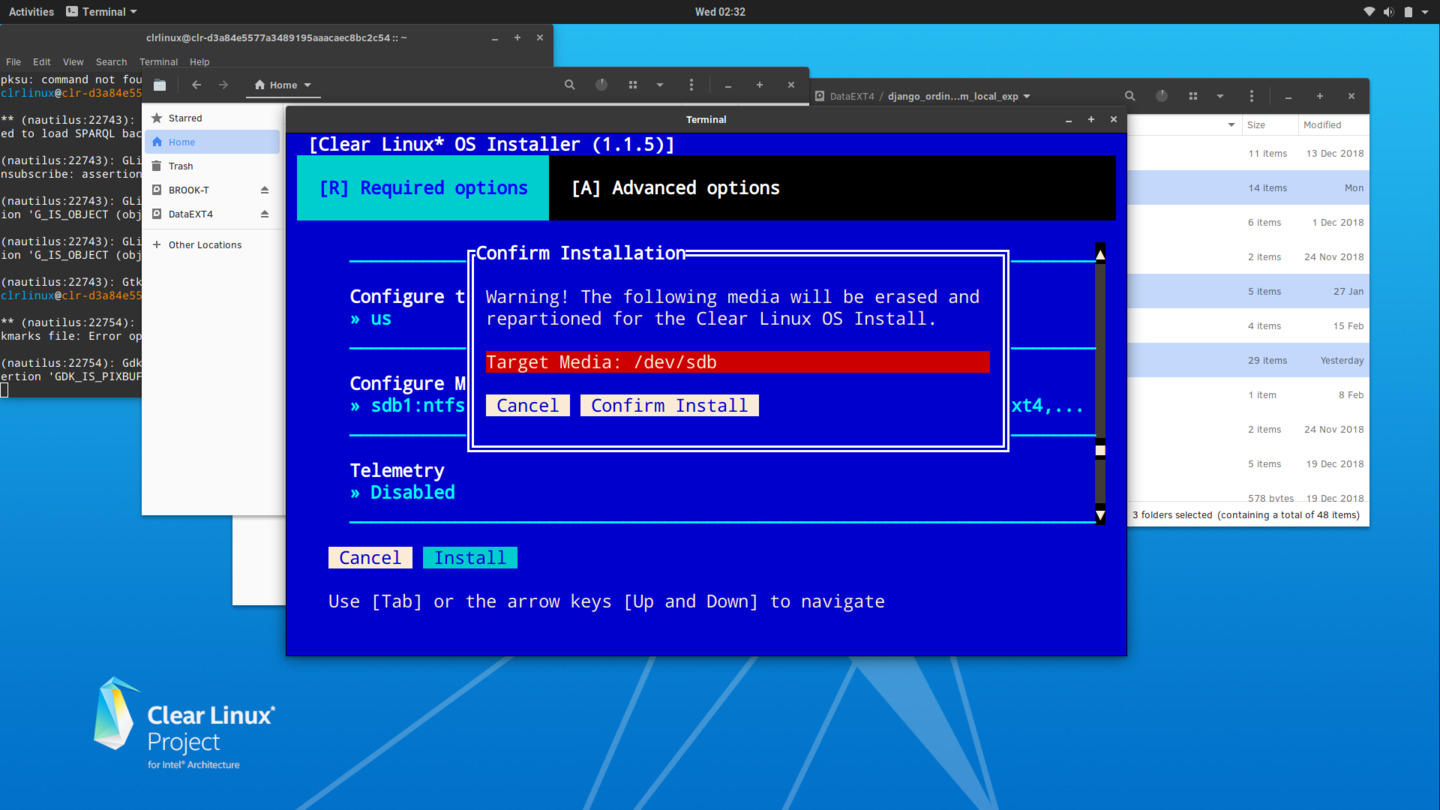 Clear Linux Will Erase the Entire Disk.
Clear Linux will delete the entire disk before creating its partitions, even when assigning existing partitions.
After numerous attempts to assign partitions from the two disks, in the Installer and the Live Desktop images, I decided to only select existing partitions from the second disk, including a small partition properly formatted and configured for use as an EFI System Partition on the second disk that I use as a backup of the one on the primary disk. This time the selections were accepted, but I was presented with the screen displayed in the previous screenshot, warning me that proceeding will delete the entire disk!

The First Part of the Changes I Made to My Acer In Order to Install Clear Linux
I relocated the Windows partitions from the primary SSD to the secondary HD in order to accomodate the Clear Linux (version 28210) installer's limitations.

After this relocation, I was able to select the primary SSD for installing Clear Linux specifying appropriately sized partitions for an EFI System Partition, a root filesystem, a home filesystem, and swap space. The instller did not touch the secondary drive where my data lives. 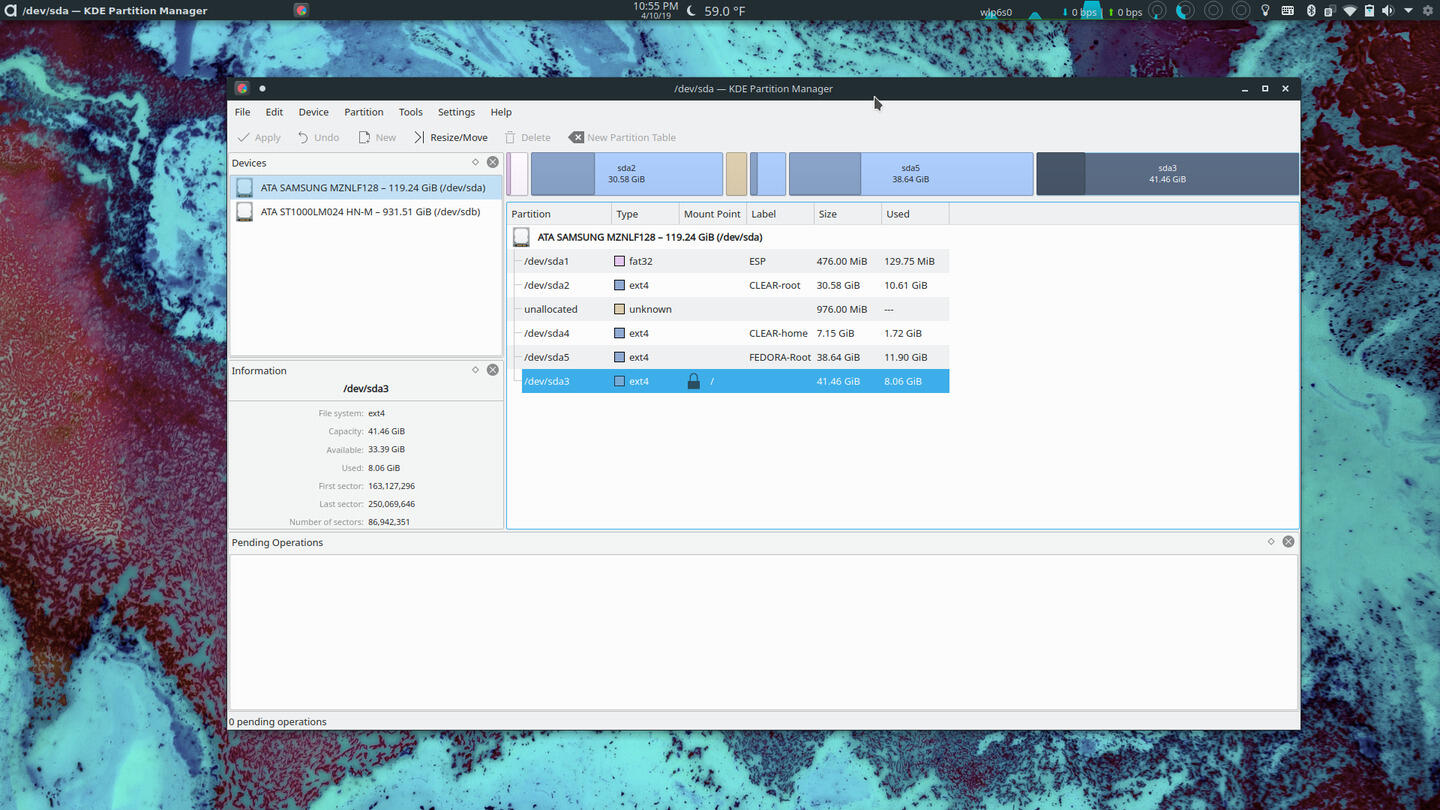 KDE Partition Manager Showing Partitions on the Primary SSD After Changes
The unlabled partiton is a new Solus installation which I compare to Clear Linux in the review of Clear Linux.

As many seasond Linux users know, this kind of limitation doesn't exist in many modern GNU/Linux distributions. Clear Linux may be at this time have these requirements because it may have evolved from a distribution for containerized applications or some similar specialized use.

Thanks to these hoops I went through, I now have reclaimed the space that was wasted on Windows (I never booted into it), and now can have three Linux installations -- root partitons only, with home partitions on the secondary HD -- instead of two, but at some point I'll need to update the Windows Boot Manager configuration to point to the new ,location, if I want to boot into this relocated Windows installation