Condres OS is an Arch based distribution -- actually taking many components from the defunct Apricity OS -- developed by the Italian company CodeLinSoft. In addition to an easy installation of Arch using the Calamres GUI installer, it aims to provide a professional OS suitable for businesses. As such it is developing a centralized system control center to proide functionality similar to Mageia Control Center and SUSE/openSUSE's YaST.

The distribution provides many desktop specific ISO's and even a pure Apricity OS version, whcih the company distributes as Apricity OS Reborn.

This article reviews an installation of the 19.09 snapshot released on September 2, 2019 using the KDE Edition ISO.

Note: In a surprise move, the developers of Condres OS discontinued the project as this article was nearing completion on September 30, 2019. I decided to stop working on the article and post it in its state as I learned of the project's discontinuation, just in case someone has an interest.

Condres OS provides an Arch based distribution similar to many Arch derivatives. Like the typical Arch derivative, it uses Arch repositories for the bulk of the packages available on the system but adding its own repository to the Arch set to distribute not only custom themes and some additional packages that one would get from the AUR when using Arch itself. But unlike the typical Arch derivative, it distributes a wide variety of software from its own repository. Some of this software is usually not found in any Linux repository including the AUR and includes BitDefender anti-virus for UNIX systems and Adobe After Effects. (More on this and other aspects of Condres with respect to available software in the Software and Package Management sections, below.)

Condres, unlike the typical Arch derivative, which use the stock Arch kernel, also distributes its own kernel -- a slightly older one than that available from Arch -- from its own repository, apparently to have a more stable kernel. When I updated the Arch installation on my Dell G5 today (September 27, 2019), the kernel was updated to version 5.3.1, while when I updated the Condres installation (also today) on my Acer V15 Nitro, the kernel was updated to version 5.2.17.

It seems to straddle the bleeding-edge/stability line between Arch and typical derivatives and Manjaro, which while being Arch based and using Arch packages, uses its own repositories in order to allow for additional time to stabilize updates and add their own packages.

Besides the software selection in its own repository, Condres distinguishes itself from other typical Arch derivatives with the extent of its attention to the appearance of the distribution. Condres installs 25 custom wallpapers, most bearing the Condres logo. 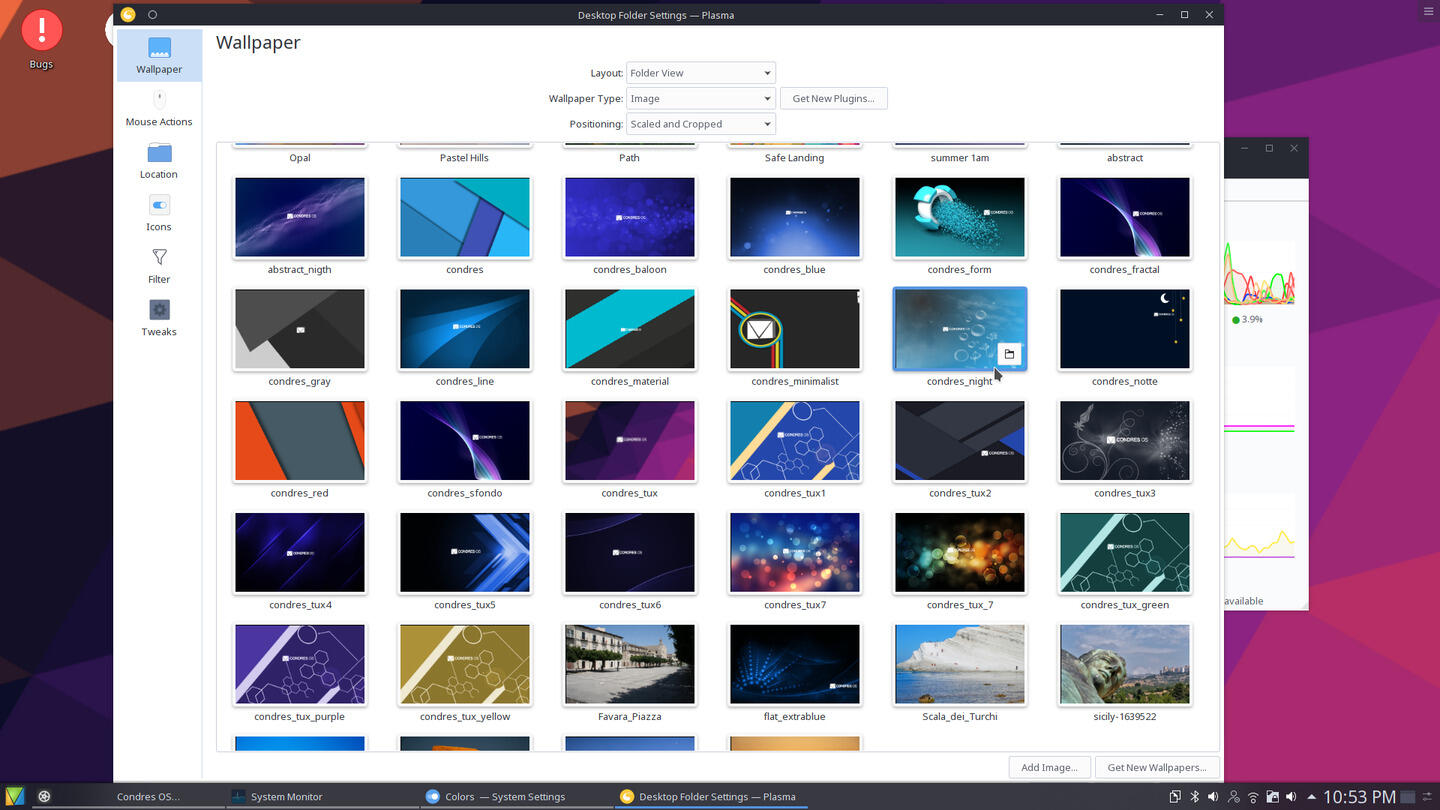 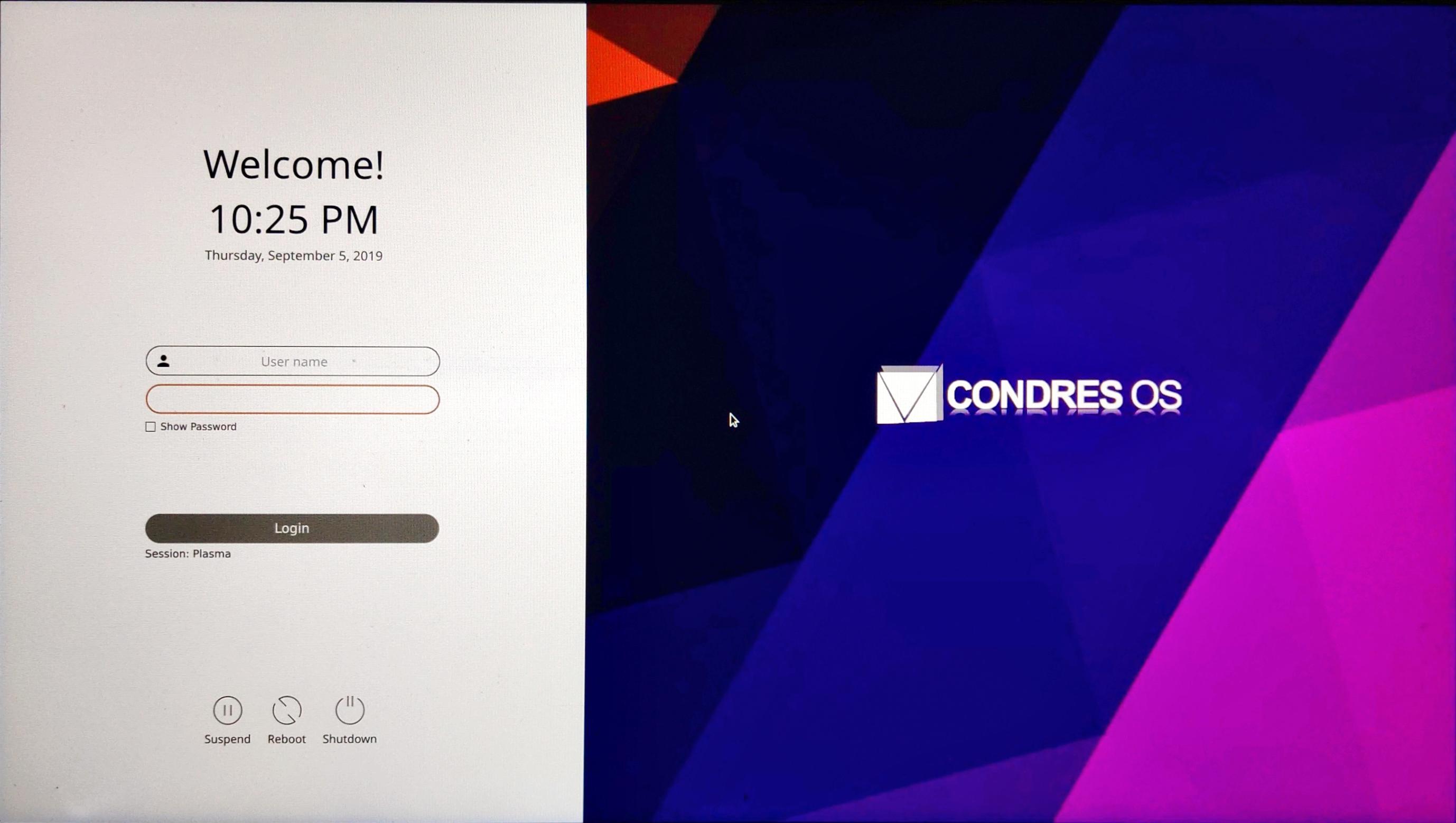 and most unusually, a simple pixel graphic that incorporates the Condres logo that is displayed after logging into one of the console terminals by pressing Alt + Fx. Note: All screenshots after the following set don't depict the distribution's appearance as shipped by Condres but after my own customization. 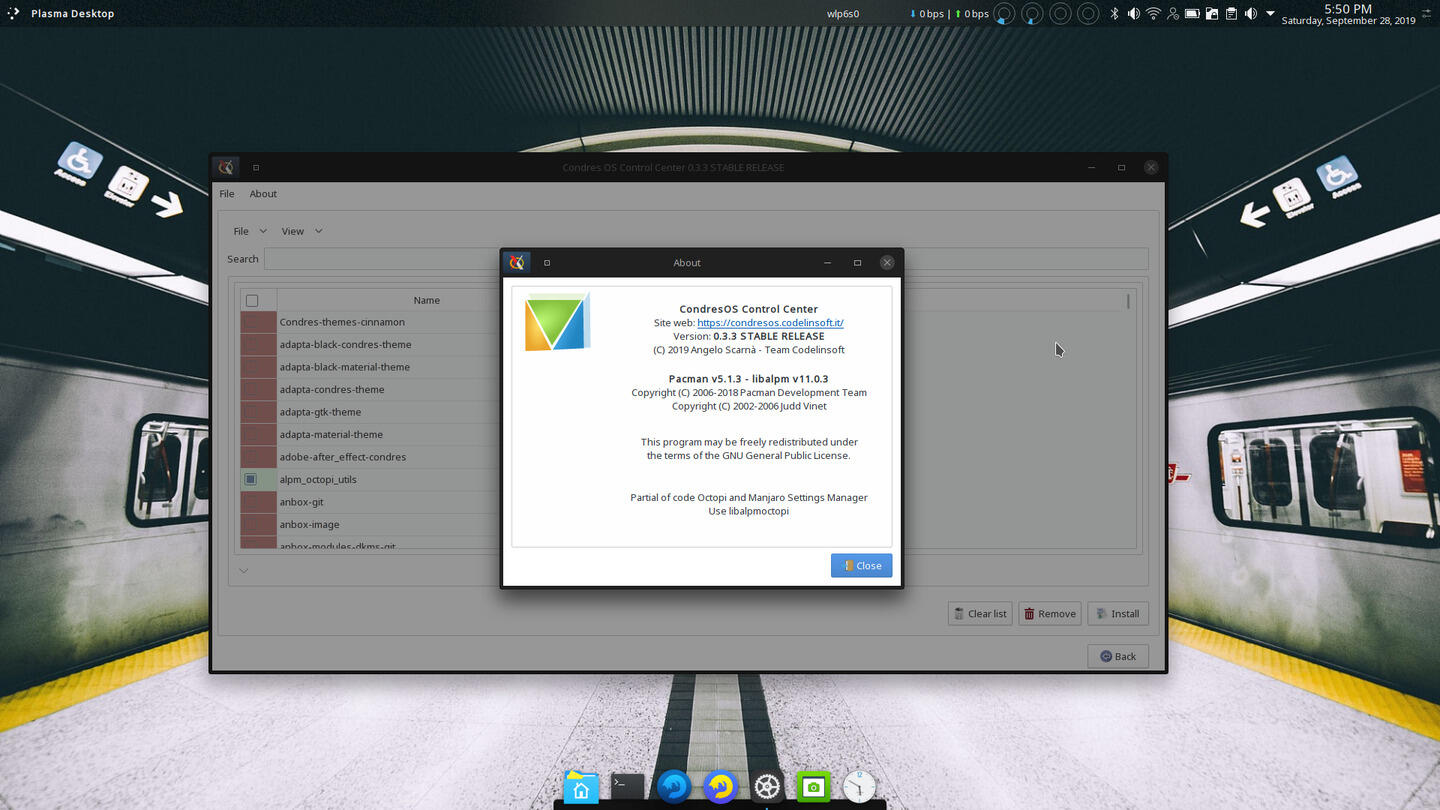 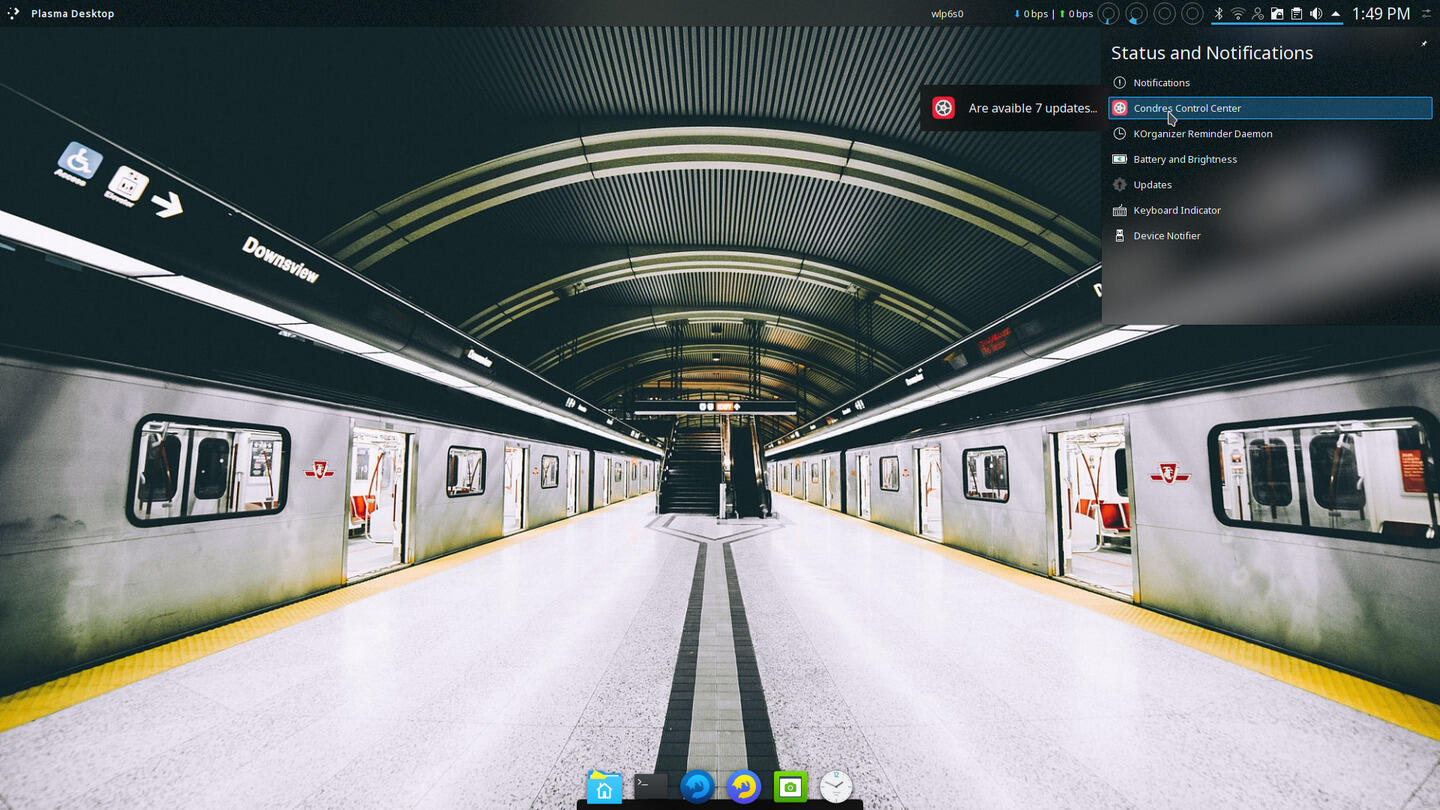 While it is derivative in implementation, and currently still immature, it is a good idea for a distribution that seeks to commercialize its product by targeting businesses to include a centralized control center. Such a system administration tool adds a great deal in giving the distribution a sense of professionalism as well as being something useful if well implemented.

Unfortunately, despite its efforts, there are numerous minor problems, including one that the distribution caught after release, the solution of which it promoted on its website prominently. This issue prevented icons in the Condres Control Center in the KDE Edition from being rendered. Other minor flaws include that the names of additional Plasma themes installed by default are not displayed in system settings components where various theme elements are selectable, while those that are included as part of Plasma do, and that the package that provides the GTK application configuration module for Plasma System Settings is not installed by default.

These appearance related issues were not really a problem, especially since I customized the appearance to my taste. There were more serious issues. First, the system boot is unnecessarily prolonged by the OS attempting to establish a dhcp link on the Ethernet port, despite a cable not being plugged in. This is not something I've noticed in other distribution.

Second, the default shell is bash, but in actuality, the zsh shell is started from within bash by the bashrc configuration, converting the shell to zsh. Maybe this is done because zsh is regarded as a more advanced shell and for this reason is provided by the distribution, or maybe because the Powerline configuration is more automatic with zsh. In any case zsh needs configuration to be usable, which the distribution did not do. This lack of configuration makes the Home and End keys non-functional. It was also not possible to type within the existing text of a command typed at the prompt before executing, for example when correcting a typo in a command before executing.

There is a little zsh configuration guidance on the website, but this only addressed a small portion of the configuration necessary. I found the complete solution to this lack of configuration on the Arch wiki, which I give below in fixes and enhancements.

Third, and most frustrating for me was that the distribution assigns user id 1000 and group ID 1000 to the first created user instead of the customary 1000, which is assigned to sambasheres. While this may not be a problem for other users, it is for me because of how I mount my data partitions to make them available to any of the multi-boot distributions I install on the laptop. I have a partition formatted in ext4 labeled DataEXT4 and another formatted in NTFS labeled DataNTFS. I make directories with these names in my user directory and edit the /etc/fstab to mount the partitions to these directories. As long as the first user created is given the user id 1000 and is in primary group with a group id of 1000, there are no conflicts, whatever distribution I use.

The first time I tried to access these partitions I was confronted with an error in Dolphin indicating that it couldn't open the directories where these partitions were mounted. It took me a while to notice that the intermediate cause of the problem being lack of permission. Then, upon adding user and user group fields to Dolphin, I noticed that instead of showing the user name and the user group name in these fields, user and group ids -- other than 1000 -- were displayed in these fields.

During the course of writing this article, while nearing completion, I learned that the Condres developers decided to discontinue the project. This is a shame because despite some minor quality control issues at this time, the ambitious vision for the OS, including the Condres Control Center -- a centralized control is unique among all Linux distributions, let alone an Arch based distribution -- and the availability of diverse software from its own repository, would have in time made an excellent Arch based distribution equal and alternative to Manjaro. 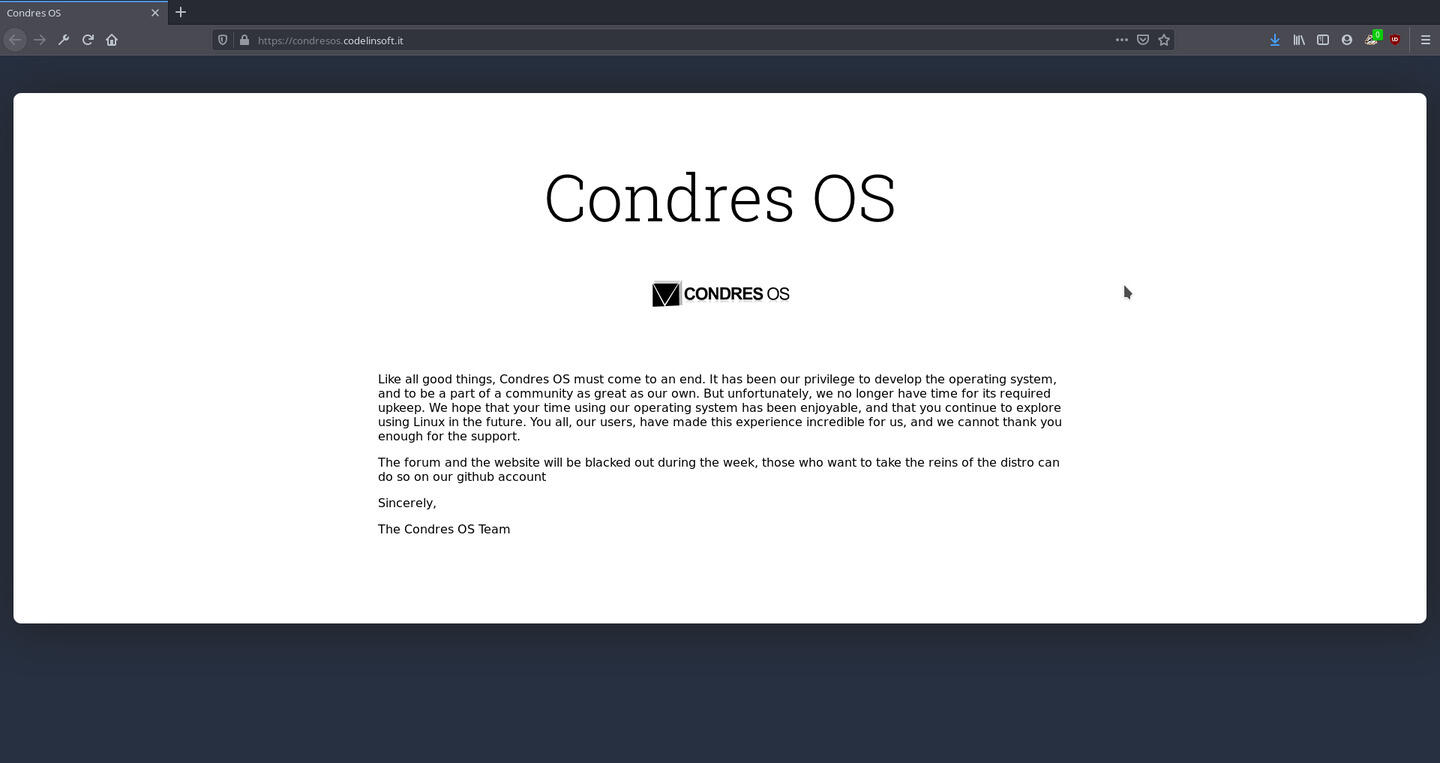 The Condres OS Developers Discontinued the Distribution on September 30, 2019
The developers decided to discontinue the project immediately before this article was published. 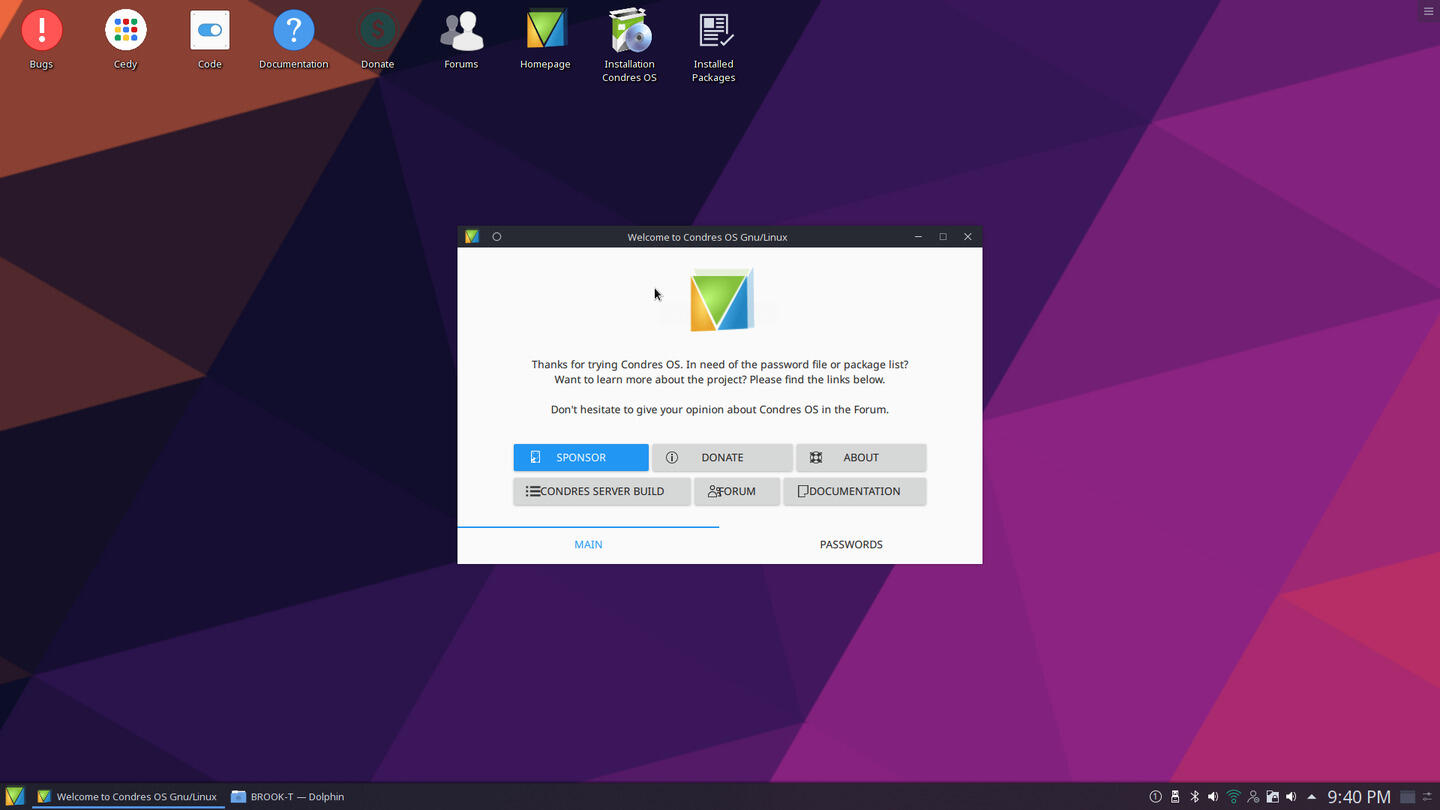 The Live Environment
The live environment greets the user with a welcome application. It also features numerous desktop links to resources on the Condres website, many of which are broken.

One notable characteristic of Condres OS is the extensive selection of software that is installed by default. Many distributions seem to limit the software installed on the system by default to what they deem to be the most popular and essential and usually only install one program per function. Condres doesn't make these determinations. It includes, for example, three browsers by default. 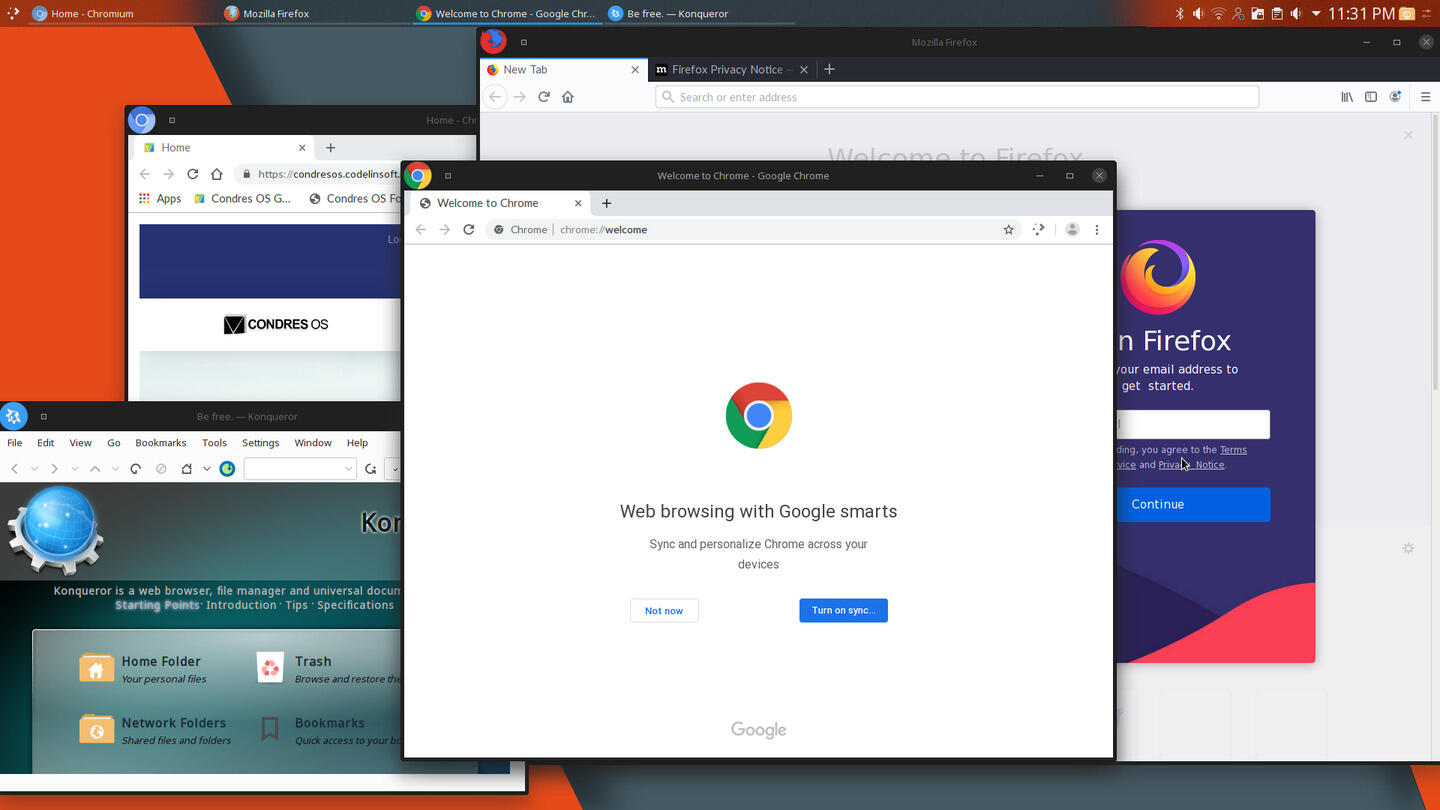 Some users may find the software installed by default to be excessive, but there is a definite benefit in that you may not have to add any software after installation. I myself didn't have to install anything except Firefox Beta and Firefox Developer Edition and maybe ktorrent althou a few other torrent applications were already installed. I was actually pleasantly surprised by the availability on the system of the aria2 CLI download manager. The screenshots below show all of the programs installed by default.

Software Installed on Condres OS by Default
Of all the software displayed in these screenshots, I only installed Firefox Beta and Firefox Developer Edition, and possibly ktorrent.

Also notable is the selection of software in Condres's own repository. As mentioned above, it includes some unusual software including Adobe After Effects and BitDefender. Adobe After Effects is a proprietary commercial software that "delivers a comprehensive set of tools to efficiently produce motion graphics and visual effects for film, video, multimedia, and the Web." I was surprised to see this in the Condres repository since the product documentation indicates it is only available for Windows and macOS, but it turns out this package facilitates using the program with Wine. BitDefender is an anti-virus software which was at one point, when I used it on Windows, rated the highest by independent anti-virus software evaluators. The version included in the Condres repository is which seems to be in end-of-life status, being replaced by another BitDefender product which also supports Linux.

Condres OS, like Mageia and openSUSE, uses a component of its centralized control center -- the screens of which not related to software management are shown above -- for GUI package management. The software component, accessed by the first category tab in the control center, includes tools for installing and removing packages, updating the system, configuring repositories, viewing the package management history, and cleaning packages.

The installation and removal tool opens to a screen that lists all packages, with installed packages indicated visually. The displayed packages can be filtered by package group or repository. A toggleable pane at the bottom of the screen shows information on the package, as well as packages to be installed and removed in the transaction.

Screenshots of these tools inaction is shown below. 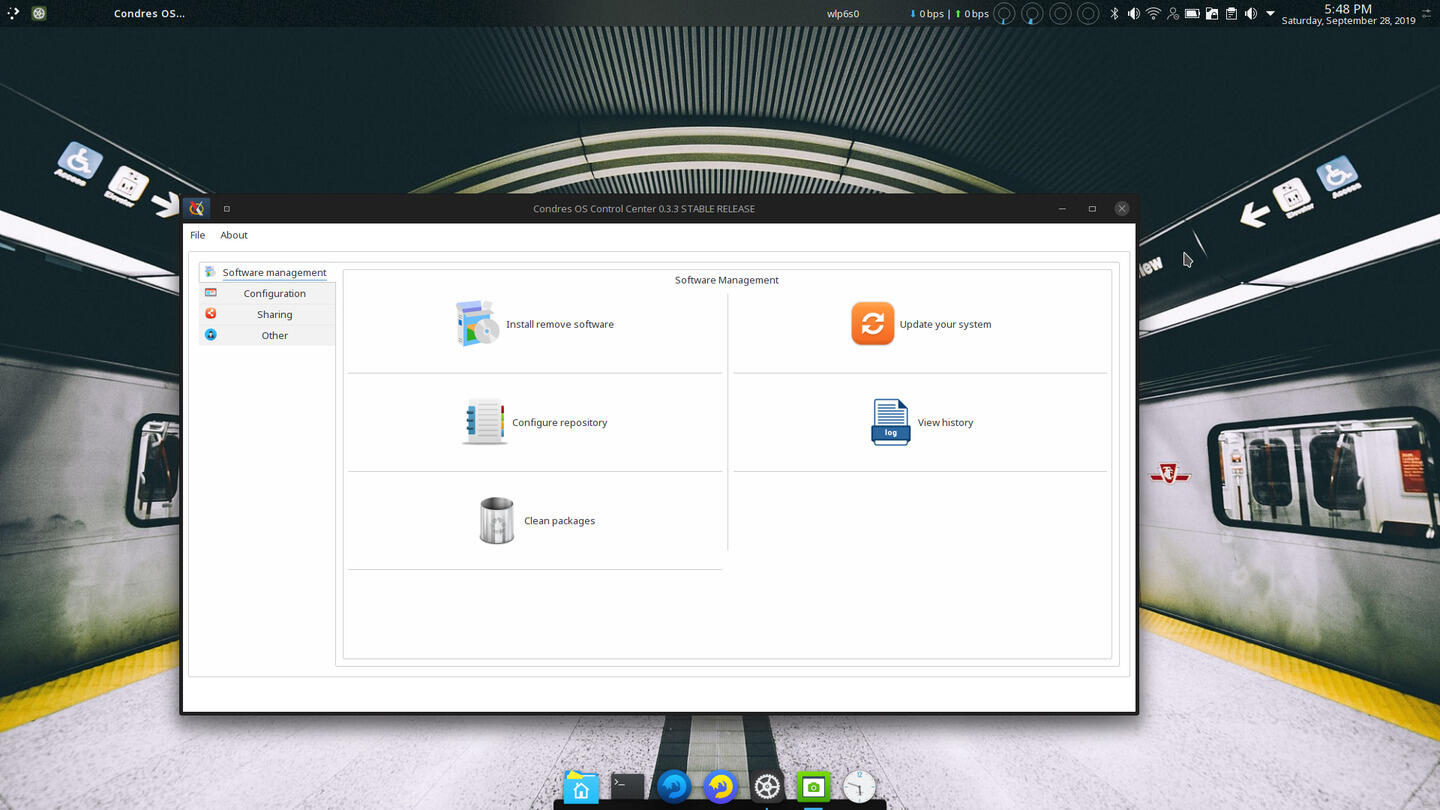 Condres Control Center's Software Management component also includes system update capability which is well integrated with the Plasma shell. Unfortunately, Plasma's default software update notification which in some KDE implementations, such as openSUSE's Leap and Fedora's, this native applet performs the software update within an applet expanded from the system tray. In the case of Condres, it opens Discover, KDE's native package management GUI, which isn't configured to do anything.

Of course, like all Arch based distributions, Condres pacman as its CLI package manager. A few screenshots of pacman in operation in Condres are shown below.

Condres Uses pacman as its CLI Package Manager
The second screenshot shows output from one of the custom packages in the Condres repository.
blog comments powered by Disqus