When I tried Solus 3.9999 in late 2018, all of the software I needed at that time was available in the distribution's default repositories. Now, having installed the recently released Solus 4.1 Fortitude Plasma Edison, one important program for me, Kile, built using KDE technologies, is not available in the distribution, and the developers refuse to package it. It is available in other distributions and I have been using it regularly recently in Arch, openSUSE Tumbleweed, Fedora, Manjaro, and even Sabayon; so it works in the latest versions of these distributions with the latest KDE Frameworks, (although the version number inconsistency on the part of Kile required workarounds in the package version number).

As it seems the developers will not add this software, I think this is a perfect opportunity to try one of the innovative and unique features of Solus -- its packaging system. This article describes this system and my experience packaging Kile, creating a custom local repository, and installing the system package manager.

The Solus build system, centered around the solbuild program, allows the building of packages in an isolated environment, via cheroot, against an image that contains packages in either the Solus unstable or stable repositories. Like all other packaging systems it uses a "recipe" for building a package in the form of package.yml. One of the nice features of the system is a script that generates a skeleton of the file from the upstream tarball link with some values prefilled (mostly accurately).

solbuild is run using one of several available profiles which will alter the characteristics of the resulting package. These are the main, unstable, and unstable-local profiles. The first results in a package built against the stable image, the second and third in a package built against the unstable image. The difference is that the packages of the last profile are automatically transferred to /var/lib/packages/local/ which can be used as a local repository to build packages against.

In my experimentation with Solus packaging, the goal was to simply build a package not available in the Solus repository and install it from a local .eopkg file, so I didn't bother with the unstable or unstable-local profiles. I made a directory alongside the build directory and configured it to be used as a local repository instead of /var/lib/packages/local/, which by default is only for locally built packages using the unstable profile against which other packages can be built, although it may be possible to manually place packages built with the main profile in the default unstable local repository and install them using eopkg instead of building against them. I didn't try this; instead I copied the packages written to the package's build directory by solbuild to my custom local repository and installed my build of Kile from there.

I also didn't use another component of the Solus packaging system, arcanist, a simple -- for the user or contributor -- tool to push packages and package changes to the remote development infrastructure. I also didn't bother with setting up a global Git configuration which is required for setting up arcanist. In normal use of the Solus packaging system for contributors, a Git repository is created in the package's build directory and the Git tracking is used in the remote infrastructure when submitting a package using arcanist. I did, however, set up a Git repository using a local configuration to track the changes to the packaging sources, primarily

In building Kile and adding it to the local repository, I used the process described below, which is a little different from the documented process and the process presented in the YouTube tutorials on Solus packaging. The differences are focused on

The most difficult aspect of preparing the package.yml is in having the complete and correct set of build dependencies, and to a lesser extent the runtime dependencies. In the case of packaging Kile the dependencies are not as clear cut as the examples in the tutorial videos published on YouTube by the lead developer. In the videos many of the examples were either Solus projects or simple software in terms of building and developers spelled out dependencies.

It was helpful to use

to find the dependencies of a package once a certain package was determined to be relevant. The epcsearch.py was also useful in finding some useful information for populating dependencies in the package.yml -- used, for example, as follows from the package's build directory:. For packaging Kile the biggest clue, by far, as to the needed dependencies was the CMakeLists.txt file in the Kile GitHub repository, more so than the repository's README or similar documentation which are used in the tutorial examples as sources of dependency information. This file includes the block:

These are directly visible in the other biggest clue, the openSUSE .spec file for their build of the their .rpm package. CMakeLists.txt also mentions find_package(Poppler COMPONENTS Qt5) as well as something similar for Okular which is also explicitly mentioned in the GitHub repository README.

The failure this time, according to the build error messages, was that KF5 component were not found. Because I couldn't find these components by using the methods in the YouTube tutorial, I assumed they were included in the plasma-framework-devel package. I finally found these components by looking through the Kate package.yml on the its page at the Solus developer site. All of these packages have names that atypically don't include "KF5" but are something like "ksomething-devel".

After adding these I had another build failure. This time the build error messages mentioned "ECM", which, on second look, were mentioned at the top of CMakeLists.txt. The openSUSE .spec indicated indirectly that this may be cmake-extra-modules, which I added to the build dependencies of the package.yml. The next build was successful. The final package.yml is below.

The complete runtime dependencies for Kile, some of which are optional, are below.

Finally, build the package with: 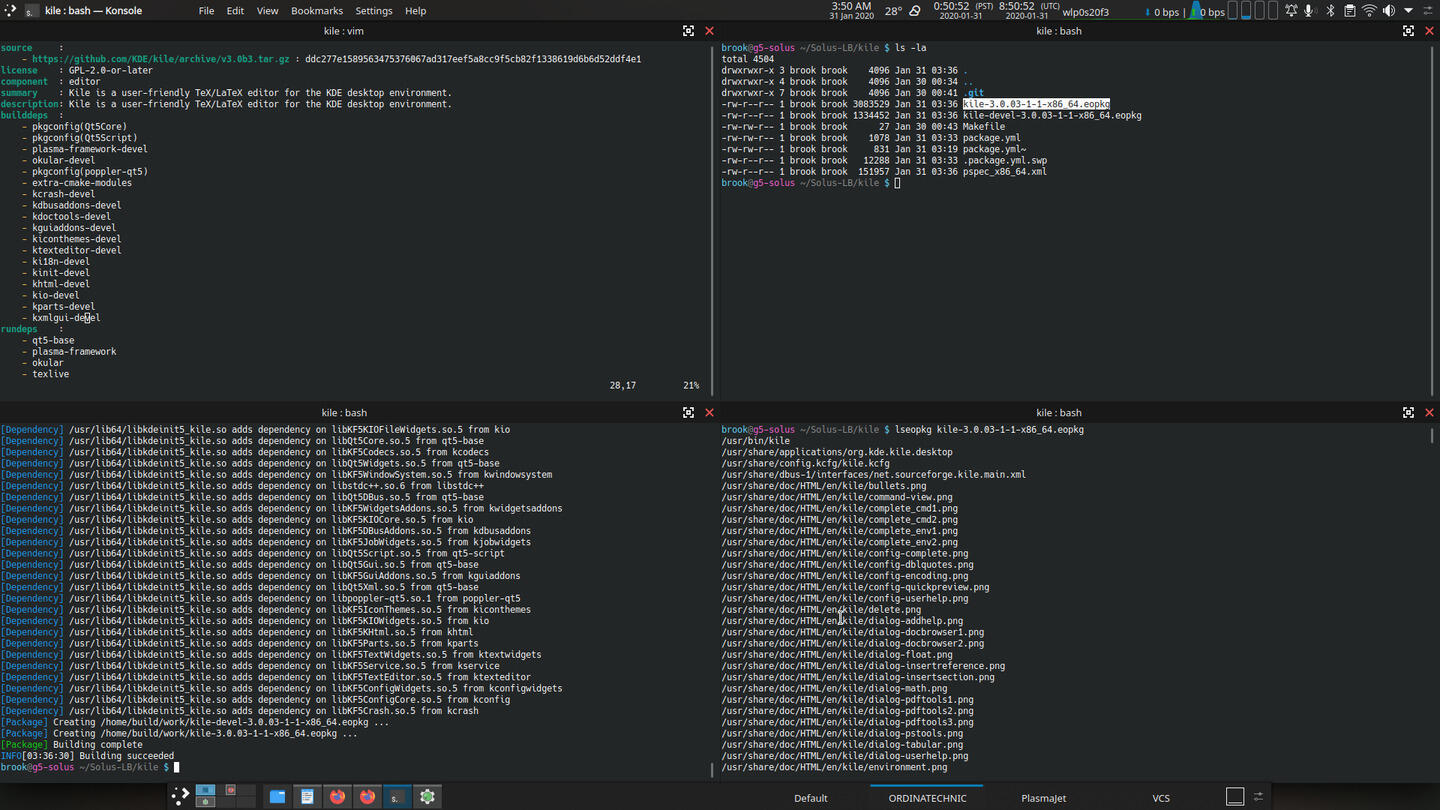 Click on any of the thumbnails to view a slideshow of the images.

I enabled a local repository at a path I chose, and populateed it with the package I built using the Solus build system, using the following process.

After this procedure I was able to search for and install Kile, but there was a problem with the build in that the dependency on KF5Init caused a kile-devel package to be produced which caused a dependency cycle between kile-devel and kile which PISI a core component of eopkg couldn't handle as pacman can after an error message. Of course, were it not for my ignorance, this was probably avoidable with a better package.yml file. 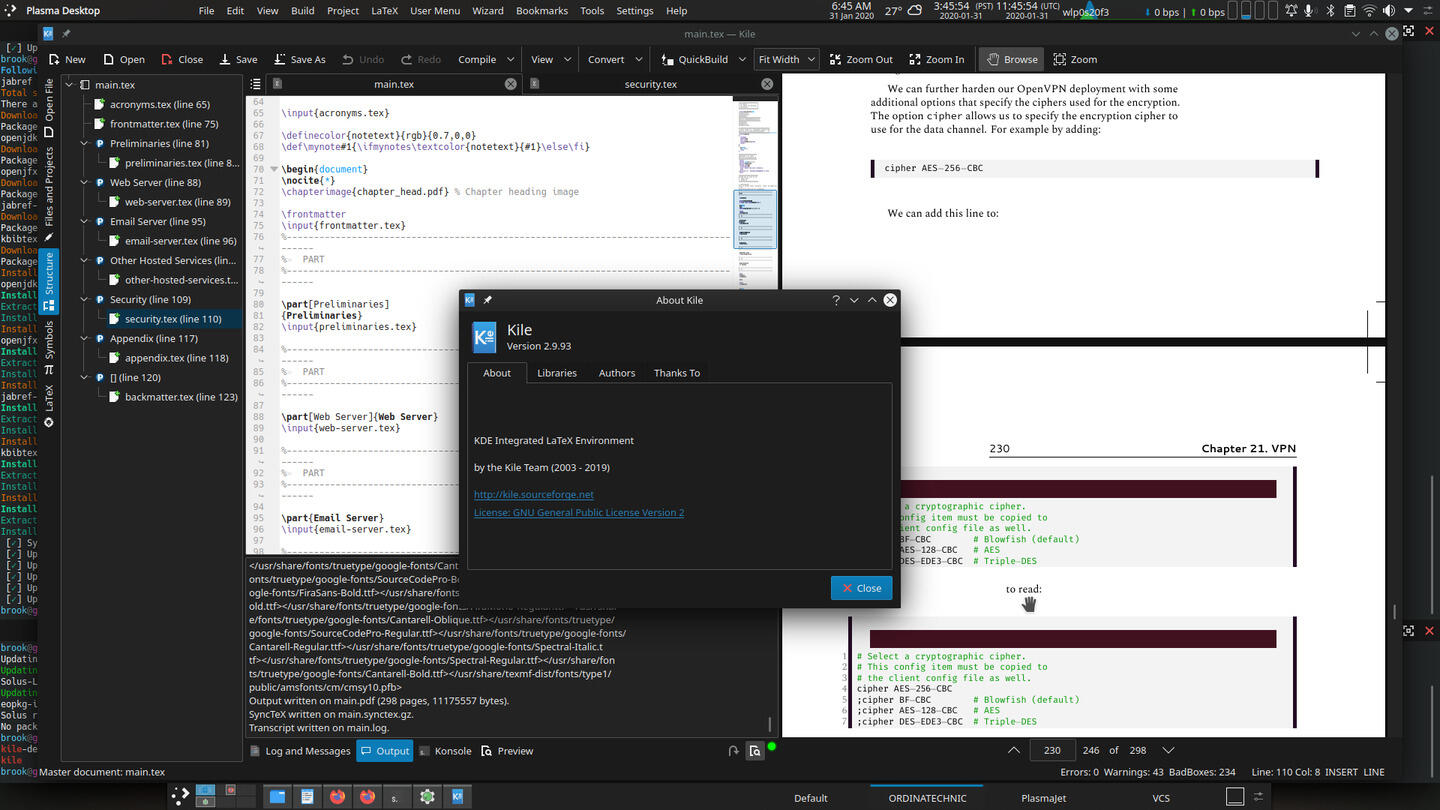 The Locally Built Kile Running on Solus 4.1 Fortitude Plasma Edition
Click on any of the thumbnails to view a slideshow of the images.

In any case I was able to resolve this to the satisfaction of my needs, which was to have a properly working Kile on my installation of Solus by first installing kile-devel with the --ignore-dependency option to the eopkg install command, then installing kile using eopkg without any options.

The worst part of the experience was with the repository indexing command as the documentation doesn't mention the option -o which allows users to provide the path of the output file. In the documentation the provided command is

which doesn't require an output file path as it automatically places the output in /var/lib/solbuild/local/ where Solus would like the local repository to be. I mistakenly added the .xz, which as it turned out, is automatically added by the indexing command. This resulted in an error when adding the repository.

Other things which I thought were interesting or otherwise worth mentioning:

The Solus Project has a series of articles on using the solbuild, which can be accessed at the main Packaging page on the Solus Help Center. A series of video tutorials is also available, the first of which is Learn Solus Packaging - Session 4 (Beginners).