Besides the excellent sound quality and solid build quality, it has the longest claimed battery life of any Bluetooth headphone, a wired mode, and a companion app. We discuss these features and provide a review of these headphones in this article.

When my ATH-DSR7BTs failed after eighteen months of heavy and abusive use, I decided to get the ATH-M50xBT based on the reputation of the wired version of these headphones and because the 50% discount at which I got the ATH-DSR7BTs was no longer available. Compared to the Bluetooth headphones at the highest end in Audio-Technica's Sound Reality line, which partly comprises the ATH-DSR7BT and ATH-DSR9BT, the ATH-M50xBT ($199.99 at Best Buy) is conventional in terms of innovative technology. Whereas these Sound Reality headphones headphones use the Digital Pure Drive technology, which employs completely digital electronics in all aspects of sound reproduction from source to endpoint and support the aptX HD Bluetooth streaming codec, the ATH-M50xBT doesn't incorporate either of these technologies. And unlike the Sound Reality headphones, the ATH-M50xBT are not Hight Resolution Audio certified. However, even without the Digital Pure Drive electronics and the lack of the aptX HD codec, and Hi-Res certification, the sound quality is excellent, according to one review, surpassing the $299.00 ATH-DSR7BT (but not the $549.00 ATH-DSR9BT).

Apparently, the focus in designing and marketing the ATH-M50xBT, is not in innovative technology, but in adding the convenience of a Bluetooth connection to an existing series of wired headphone highly regarded for their sound quality and durability, the ATH-M50/ATH-M50x, about which A-T says:

As the most critically acclaimed model in the M-Series line, the ATH-M50 is praised by top audio engineers and pro audio reviewers year after year. Now, the ATH-M50x professional monitor headphones feature the same coveted sonic signature, with the added feature of detachable cables. From the large aperture drivers, sound isolating earcups and robust construction, the M50x provides an unmatched experience for the most critical audio professionals.

The ATH-M50xBT supports the aptX and AAC Bluetooth streaming codecs as well as the lower quality, fallback SBC codec, but not the Hi-Res audio compatible aptX HD standard. That it doesn't support aptX HD may not matter because the source device, as well as the headphones, must support the aptX HD standard. One large class of devices that doesn't support aptX HD are iPhones, which doesn't even support the aptX standard, instead supporting the AAC Bluetooth streaming codec. (The aptX codec is included in Apple laptops, however.)

In my case, my current phone, a Razer Phone 2, only supports AAC for high definition audio, so the lack of aptX HD doesn't matter since I can't even use the aptX codec for the Bluetooth connection. Also, based on what I have seen on the internet, I suspect that the WiFi/Bluetooth combination cards on my Dell G5 and Acer Nitro support aptX on the hardware level, but require additional drivers by the manufacturer, which they may not be provided due to additional licensing costs. On Linux specifically, aptX support isn't included by default, although progress is being made.

The lack of Hi-Res capability also may not matter because, in addition to requiring a suitable codec, the files must be encoded with the necessary resolution (typically 24bit/96kHz) from a high quality source, often provided to end users in FLAC files, not the common mp3. Audio files so encoded are very large and may not be practical or available. Also users would need to reaquire files of their existing media in the higher encoding, something which may be time consuming or prohibitively expensive. In addition, many people these days get their music from various streaming services, few of which provide content in this high quality format.

The ATH-M50xBT incorporates a Bluetooth 5 capable radio, and seems to be the only headphones of the over-ear/on-ear form factor that uses this standard instead of the previous Bluetooth 4.2. This new standard, (Bluetooth 5.1 exists but doesn't seem to have flowed to actual products), allows for 2X the data transfer rate, 4X the range, and 8X the packet size compared to Bluetooth 4.2, although there is a trade-off between data transfer rate and range at any instant.

The ATH-M50xBT allow a wired connection using the included 3.5 mm to 3.5 mm audio cable with inline microphone and single button control. According to Audio-Technica the sound signature is identical between wired and wireless connection modes.

Audio-Technica makes a companion app available via download from the Google Play and the Apple App Store. The app allows users to set the codec used for various connections and locate a missing headphone if location access permission is granted to the app. More importantly, the app also allows users to update the firmware of the headphones. This is unique functionality that I haven't seen in any of the headphones I've tried in recent years including those from LG, JBL, Sony, or Sennheiser.

A Companion App Is Available for Some A-T Headphones
The app manages firmware updates, besides setting a codec, and locating a lost headphone.

Other technological features that users may want but aren't included in the ATH-M50xBT includes NFC for pairing, a multi-point connection, and active noise cancellation. 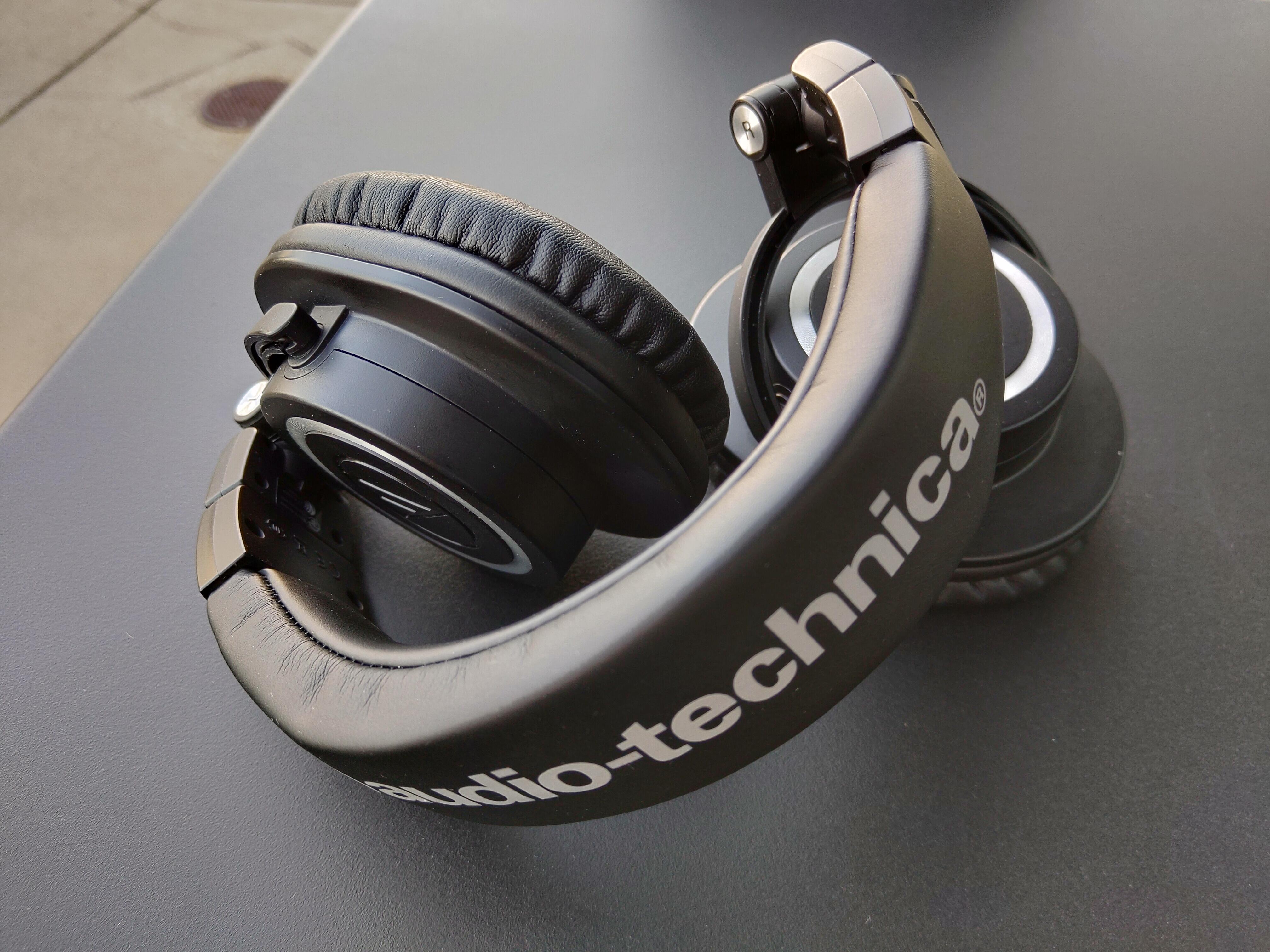 The Audio-Technica ATH-M50xBT Over-Ear Bluetooth Headphones
The design features a collapsible headband earcup housing joint, a touch control for activating a connected voice assistant in addition to buttons and a switch, and a very bold A-T logomark and logotype on the top of the headband.

Controls are also better than on the ATH-DSR7BT which had a touch sensitive main control button on the bottom of one of the earcups for Play/Pause and activating the connected device's voice assistant. The ATH-M50xBT also has a touch control area but it is moved to the side of the earcup and only provides activation of the device's voice assistant; playback control is moved to an additional physical button between the Forward/Increase and Back/Lower buttons. This configuration is significantly better than my previous A-Ts in that the responsiveness of the hardware Play/Pause button is instant, whereas on the ATH-DSR7BT there usually was a delay between tapping the touchpad and the resulting action causing me to press it repeatedly, reversing the intended action.

The ATH-M50xBT Controls Are on the Left Housing
A touch sensitive control is incorporated into the side of the left housing to activate the connected device's assistant.

Feedback is provided by voice announcements, tones, and an indicator light. The voice announcements are pleasant and natural and provide feedback when powering the device on and off, when Bluetooth is connected and disconnected, and when the battery is low. Tones are played to indicate that the maximum volume is reached. The two color -- white and red -- indicator light provides feedback on Bluetooth pairing and connection and charge status.

Durability is one of the aspects of the M50/M50x that is lauded by critics. This praise carries over to the M50xBT, with one review calling it "indestructible". While this is obviously an overstatement, these headphones seem well made enough that they should last a long time if used properly. The hinge and swivel mechanism seem robust, with four actual screws on each end of the headband apparently holding it together. There are an additional two screws on each end securing the headband. 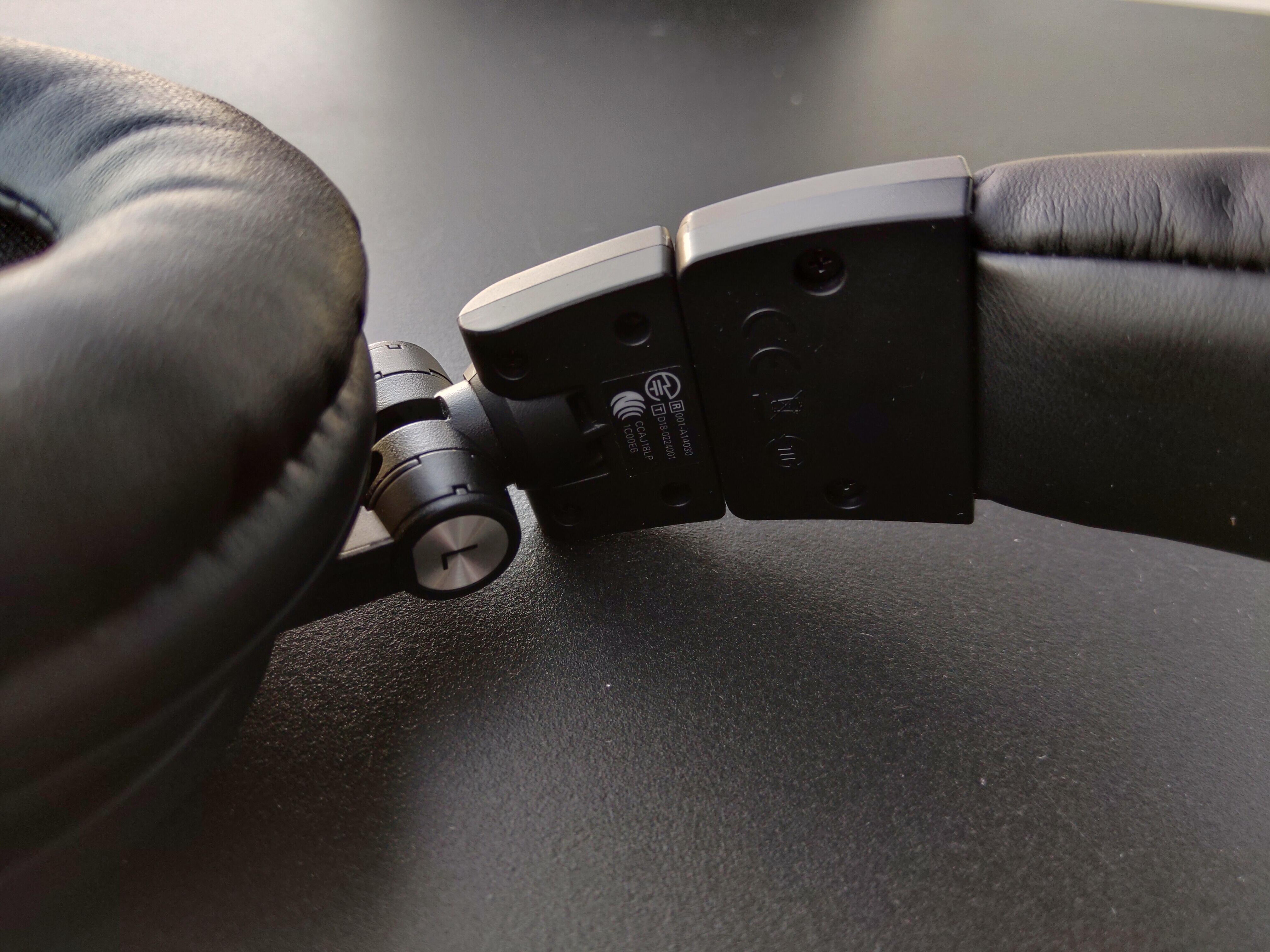 The Hinge Mechanism of the ATH-M50xBT

One definite indication of the solid build quality is the lack of creaking noises when handling or adjusting the headphones, as were present in the ATH-DSR7BT. (This may have been because of my misuse of the ATH-DSR7BT, which eventually led to their demise after eighteen months of use.)

One area where these headphones are lacking in comparison to the ATH-DSR7BT, in my opinion, is the aesthetics. The dull coarse plastic is unattractive and the bright silver grooved ring on the side of the earcups surrounding the embossed Audio Technica logo diminishes the overall visual appeal of the product instead of increasing it. 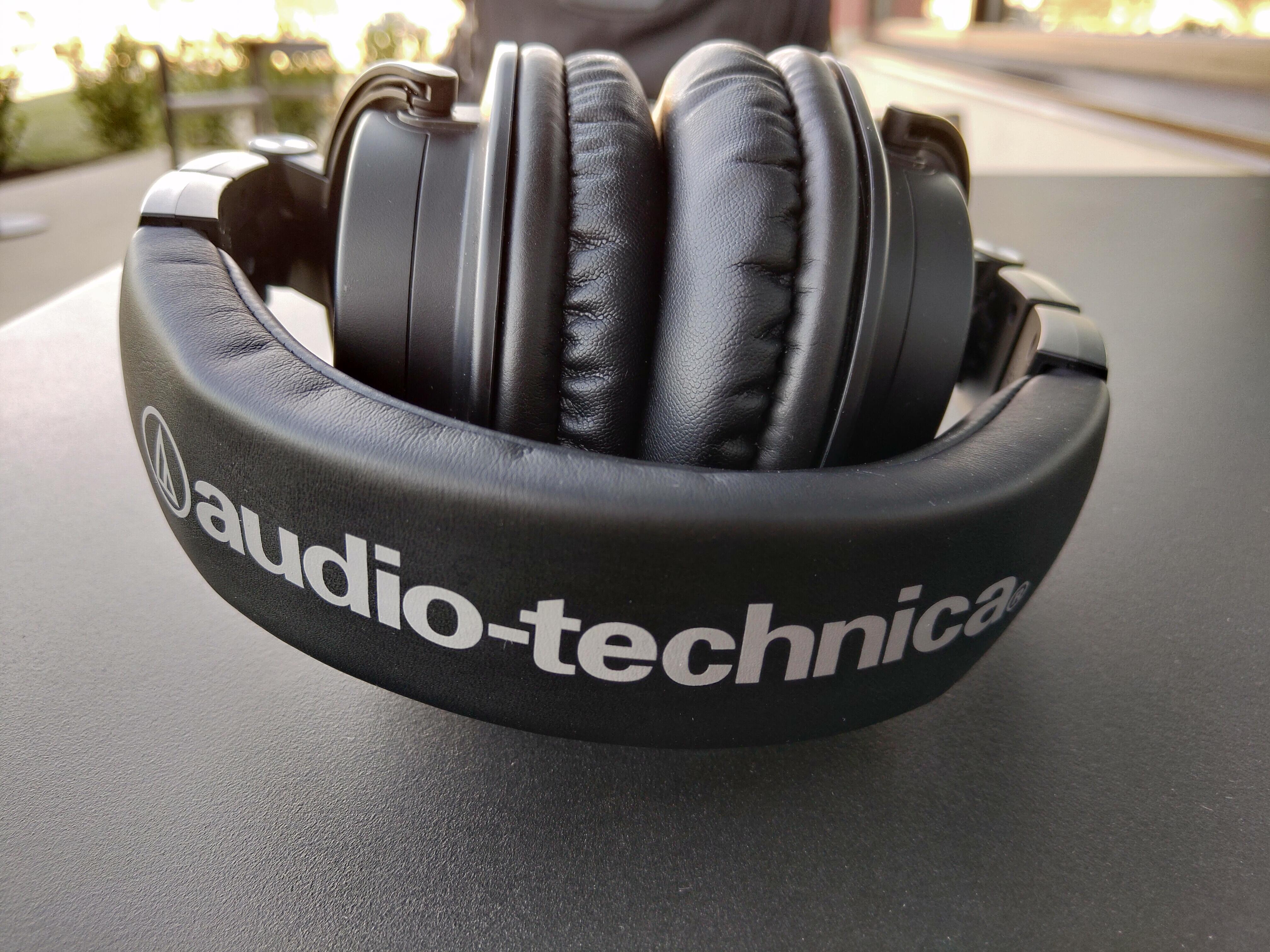 The Audio-Technica Logo and Name Are Very Bold

The very prominent Audio Technica logo and name in a very large type on the top of the headband is really the only aspect of the aesthetic design that appeals to me.

Of course, this is the least important attribute of a headphone for audiophile consideration.

Sound quality is excellent, with exceptional detail and clarity and nuances clearly evident. I noticed details for the first time in songs I've listened to many times before. Some examples are:

Unfortunately, for audio purists, as one reviewer notes there is a slight bass boost and minor agreeable adjustments to mids and highs. This was evident when comparing to my memory of the sound quality of the ATH-DSR7BT and is reflected in the difference in Audio-Technica's marketing of the ATH-DSR7BT and the ATH-M50xBT.

I also noted that the headphones were able to produce a louder volume from what I had been used to with the ATH-DSR7BT and my current day to day headphones, the Anker Soundcore Life NC.

Battery life is one of the standout features of the ATH-DSR7BT, providing forty hours between charges according to A-T. I found this claim to be reasonable with the first charge only necessary after several weeks of use. The charging time is proportionately long, unfortunately, taking a long seven hours.

Linux performance is trouble free; I was able to pair and connect on multiple distributions on the Plasma desktop. I was also able to control playback of YouTube videos on Firefox with Plasma Browser Integration enabled, Cantata, and the Spotify desktop application.

Sound quality is also excellent on Linux. This is despite the aptX apparently not being available on Linux at this time without manual sourcing of custom PulseAudio Bluetooth modules.

Included with the headphones are a faux-leather bag, a micro-USB to USB charging cable, and a 3.5 MM auxiliary cable with an inline microphone and a single button analogous to the main Play/Pause button on the headphones.

Audio-Technica Provides a Few Accessories
A protective carrying bag, an aux cable with inline mic and control, and a charging cable are included.

I highly recommend the ATH-M50xBT. It features excellent sound quality, excellent battery life, high build quality, Bluetooth 5, ability to update firmware through the companion app, and a wired mode with identical sound signature to the Bluetooth connection mode. Potential buyers concerned about the lack of active noise cancellation should consider that in many cases active noise cancellation at this price point is ineffective, at best only cancelling sounds of certain environments with simple characteristics and not all environments.

The only reason to consider alternatives is for the most ardent audio purists who may be better off getting the Audio-Technica ATH-DSR7BT or if budget allows the ATH-DSR9BT.