The Life NC is the top of the line of a series of around the neck Bluetooth earbud headphones by Anker's Soundcore brand. It features a comfortablearound the neck/on-collar design, adequate battery life, good sound quality, a multi-point Bluetooth connection that allows the headset to be connected to two devices at the same time.

Adding a lot of value to its price point, it also provides a wired listening capability and an active noise cancelling mode. We discuss these features and provide a review of these headphones in this article.

When my ATH-DSR7BTs failed after eighteen months of heavy and abusive use, I decided to get a pair of every day headphones with good sound quality in addition to a replacement for the A-T. I bought the ATH-M50xBT (read a review) for more serious and gentle use and the Life NC for day to day use.

The Life NC ($99.99 at WalMart) are a solid every day neckband type headphone with decent sound quality and many convenience and technological features that add to the value of the headphones.

The Soundcore Life NC packs a lot of technology, especially for its price point, contributing to its great value.

The Life NC is able to be connected to two devices at the same time. If, for example, there is an active connection to my mobile phone, with media playing, I can pause the playback and activate a connection on my Laptop and play media.

The innovation cited most prominently in Anker's marketing of the Life NC is the "Quad Microphones for Superior Call Quality" which it claims contribute to "Flawless Calls". Two microphones optimized for voice pick-up on each lobe of the neckband detect and eliminate ambient sounds using its "Uplink Voice Cancellation Technology" which deliver voice "with exceptional clarity-perfect for even the noisiest of environments."

The Life NC supports the SBC, AAC, and aptX Bluetooth streaming codecs. I found it unusual that the aptX HD codec is not supported for headphones that are Hi-Res audio certified (see below), unless Hi-Res audio is only available with a wired connection.

The Life NC headphones are certified for High-Resolution Audio, which according to some critics, is an attempt to re-market higher than CD quality digital music where such attempts had previously failed. This time referred to as High-Resolution Audio, Hi-Res Audio, or HRA, it is currently more feasible to promote the bandwidth and storage resource intensive high resolution audio since the first attempts in the mid 1990s on physical media.

High-Resolution Audio is partly formally defined by Recommendations for Hi-Resolution Music Production by The Recording Academy's Producers and Engineers Wing. In general, it defines that audio equipment must be able to reproduce audio encoded at typically 24 bit sampling at 96 kHz. This is higher than CD quality music which is encoded at 16 bit sampling at 44 kHz.

So if, like the ATH-DSR7BT, a wired connection is necessary for Hi_Res audio reproduction, the Anker materials don't make this clear.

The Life NC incorporates a Bluetooth 5 capable radio instead of the previous Bluetooth 4.2. This new standard, (Bluetooth 5.1 exists but doesn't seem to have flowed to actual products), allows for 2X the data transfer rate, 4X the range, and 8X the packet size compared to Bluetooth 4.2, although there is a trade-off between data transfer rate and range at any instant.

A companion app is available for download from Android and Apple app stores. The app provides an easy way to find documentation of all Soundcore products. The more useful features include a function to set the maximum volume to protect hearing, three preset equalizer modes, and most unusual it allows selecting the headphones' control functions between two available sets.

Other technological features that users may want but aren't included in the Life NC is only limited to one, namely NFC pairing.

For a full listing of specs and features see product page.

The Life NC is an around the collar form factor with earbuds at the end of two short cables connected to the main unit. The controls and mico USB connector are on the two lobes of the collar. 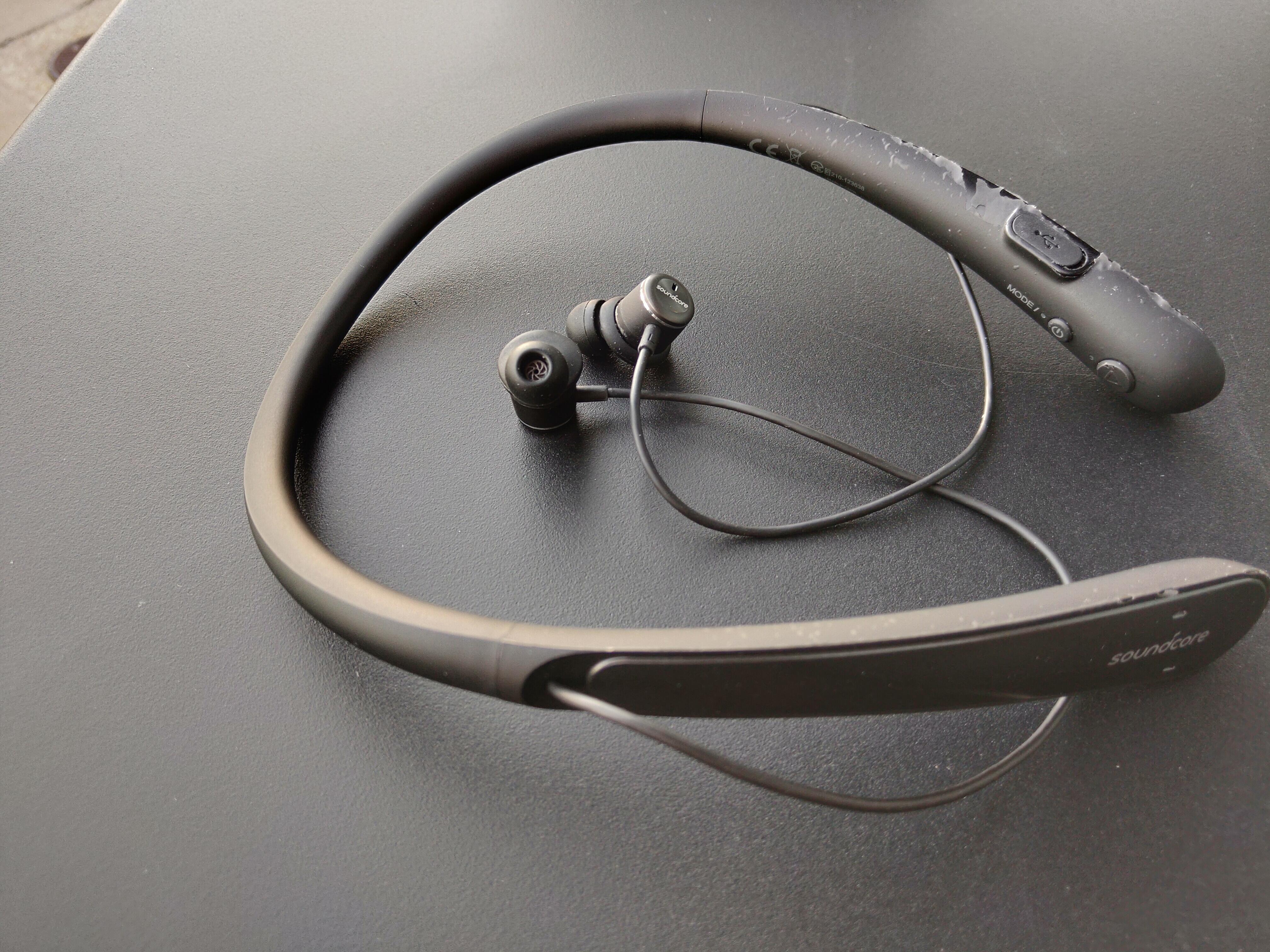 Having used the LG HBS-910 in 2016 - 2017, the top of the line in the Tone series at that time, I miss the innovative cable management of those headphones. The cables on those headphones were able to be automatically retracted with a press of a button, most likely a patented feature that is currently can't be replicated by other manufacturers. The

These headphones are comfortable. They are flexible and lightweight. I find that more than weight or flexibility the most important factor that determines the comfort of this style of headphone is the point from which the earbud cables extend from the main body of the headphones. This was a problem for me with both the LG HBS and the cables extend from the main unit at a point that doesn't get caught in

The Life NC controls are well laid out and easy to find and activate. There is one rocker button on the right lobe of the collar for Forward/Increase and Back/Decrease, and two buttons on the left lobe, one for Play/Pause and the other for Power. Both of these buttons have secondary functions activated with a long press. The Play/Pause button also activates the mobile device's assistant, while the Power button switches the ANC modes.

While the buttons are easy to use and activate, they seem out of place being on the inside (on the side of the lobes nearest the wearer's neck) instead of the outside.

Feedback is provided by various sounds played through the headphones, including sounds indicating a change in the power state, low battery, maximum volume, Bluetooth pairing mode, and Bluetooth connection activation. The sounds are rather complex and not simple tones. The sounds for power on and off are by different from each other, and by their nature intuitively understood to be for power on or power off.

There are also voice prompts indicating the active ANC mode when the ANC mode is changed.

There are two LED indicator lights, one that aids in determining the Bluetooth connection and pairing state and another that indicates the low battery and charging state.

Durability is one of the weaker aspects of the Life NC. After less than three months of use, the coating material that provides the soft touch feel is peeling off in some areas. This is not such a big issue for me compared to proper functioning. I am concerned in this regard, however, because the Life NC I have now is a replacement for a previous one which failed after one month -- it would no longer connect by Bluetooth although wired mode still work.

Sound quality is OK but not excellent. There is enough detail and clarity to hear notes and instruments that would not be noticeable with some less expensive headphones. The bass is overemphasized and it lacks definition. There isn't an adequate reproduction of nuance in instruments or notes. These characteristics of the Soundcore Life NC was very evident when comparing the sound reproduction to that of my other current headphones, the ATH-M50xBT, which does emphasize bass to a certain extent compared to the but is reproduces music far better than the Soundcore Life NC.

The Active Sound Control on the Soundcore Life NC is mediocre. It definitely reduces the noise of a steady drone of something like a loud air conditioner -- and being a similar sound, should be effective on an airplane, but is completely useless in a noisy environment with many different types and sources of noise that are not steady, such as a busy Starbuck's.

The Anker marketing claims a battery life of up to 10 hours with ANC on and up to 15 hours with ANC off. I find that these claims are accurate as I get a full day of heavy use on a full charge. Like the LG HBS-910 and LG HBS-900, the low battery warning sound is played almost before the battery completely runs out.

Call audio seems to be good, although this particular functionality is not the focus of my use of these headphones. On my end the other party's voice was deep, loud, and clear. On the other end, I never had an instance where the other party complained of bad audio.

Linux performance is trouble free; I was able to pair and connect on multiple distributions on mainly the Plasma desktop as well as some others.

Sound quality is also excellent on Linux. This is despite the aptX apparently not being available on Linux at this time without manual sourcing of custom PulseAudio Bluetooth modules.

Anker provides a good set of accessories for the Life NC.

A very nice carrying bag is included. It is a rugged cloth bag with a plush interior and even includes an inner zippered compartment for the included cables.

A micro-USB to USB cable is included for charging as well as a micro-USB to 3.5 mm audio cable for wired listening. Unfortunately, the cable doesn't have any type of inline controls.

Anker Provides a Few Accessories
A nice protective carrying bag, an aux cable, and a charging cable are included.

I would not recommend the Anker Soundcore Life NC for serious critical listening. However as a secondary headphone for day to day and active use, it is worthy of consideration especially in light of its water resistance certification. It is also worthy of consideration for frequent fliers who want a cheap pair of active noise cancellation headphones.