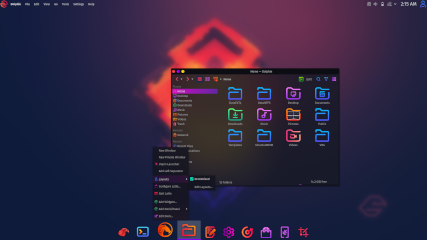 Garuda Linux is an Arch based distribution that distinguishes itself by customizing many aspects of the Linux environment. Besides offering numerous highly customized desktop environments, it uses the fish shell as a login shell with a customized configuration that also uses the starship shell prompt. Other atypical choices focus on improving performance, include using the linux-zen kernel, using zram for swap instead of the common choice made by distributins to use a swap partition if available, and disabling CPU power saving settings in favor of "performance."

Garuda is also an early adopter of the btrfs file-system, viewed as some as the next standard Linux file system, replacing the current standard ext4. It uses btrfs's snapshot capabilities along with TimeSsift to allow rolling back the root filesystem to a previous state.