Sabayon: Using Portage to Build a Binary Package for Installation by Entropy

My biggest complaint with Sabayon after using the 14.08 release for more than three months was the lack of a way to get software that is not available in the Sabayon repositories for management by the Entropy binary package management system. There didn't appear to be an easy way to build binary packages from source or from a third party tarball as there is for RPM based distributions through the rpmbuild tool. As it turns out, although Entropy can't do this, Sabayon has several alternatives for getting software that is not available in its binary repositories for for installation and management using Entropy by employing some of the functions available in Portage -- the Gentoo source package management system -- to first build the packages. This article describes one such relatively simple and safe method.

As we are not actually using Portage to install a package, but merely using it to build a binary package, it is probably not absolutely necessary to prepare the system for hybrid source/binary package management, but it is probably best to do so, and I followed my own advice. That procedure is described here; the relevant part of that procedure for the method described in this article is the section on "System-Wide Procedure".

The procedure described in this article, to briefly summarize:

All of the following commands are entered as root.

Having been introduced to the glancess process monitoring tool by Voyager, I have installed it on every other Linux I have used since trying Voyager. Unfortunately, it is not available through Entropy, Sabayon's binary package management system. But the method introduced above of using Portage to build the binary package can be used for installation and management by Entropy.

The first step is to look at the package details on Gentoo's package page for glances which shows the use flags chart, hddtemp, snmp, and web. Clicking on each of these opens another page with the description of the flag and other packages that are related to the flag, giving clues on whatever dependencies exist for the desired package. Clicking on chart, there is an indication that it depends on matplotlib a subsequent search for which in Entropy (equo search matplotlib) shows that it is available through Entropy, meaning its own dependencies are also available through Entropy. CLicking on the hddtemp, snmp, and web indicates that these USE flags are actually referring to the packages app-admin/hddtemp, net-analyzer/net-snmp, and dev-python/bottle. A subsequent search for these shows that they are available in the Entropy system.

It is also necessary to follow the link to the Git repository browser from the Gentoo packages glances page in order to see the ebuild for the version to be installed as that provides more information on dependencies. In the case of glances, the following excerpt from glances-2.4.2.ebuild is relevant.

From my heuristic experience, I have found that these lines indicate that dev-python/psutil is an explicit dependency and app-admin/hddtemp, dev-python/pysnmp, dev-python/bottle, and dev-python/matplotlib are optional dependencies that will only be installed if the corresponding USE flags are specified.

Because all of these dependencies are available in Entropy, we can just proceed with the rest of the process without using this process to recursively build the dependency packages. Also, initially we won't worry about specifying the USE flags in /etc/portage/package.use/00-sabayon.package.use.

Had I specified the use flags indicated in the Gentoo packages page for sys-process/glances in /etc/portage/package.use/00-sabayon.package.use by inserting the line

when running emerge -av -B sys-process/glances, the response would have been:

The message regarding Gentoo news appears in the second output, because it was a different computer on which I hadn't bothered to read the news. In any case, note the difference in the output with the addition of the USE flags from the previously presented response of the emerge command; in the previous output there were - prepended to the USE flags whereas, now there are not. When installing the final package with equo, the dependencies referred to by the use flags are resolved and installed along with glances, as shown in the following screenshot. Without the use flags only required are installed as specified in the ebuild, as previously mentioned.

In this case this is the dev-python/psutil package.

Installing glances with equo when USE flags are specified.
Dependencies required for use flags specified in /etc/portage/package.use/00-sabayon.package.use are resolved by Entropy. If chart, hddtemp, snmp, web, and doc had not been specified, only psutils would have been installed per the .ebuild.

Compare the screenshot with the previous one displaying the output of the equo i command where the initial Gentoo package was built without including the USE flags.

For potential Sabayon users with needs similar to mine, who want software that may not be available in the regular Sabayon binary repositories can use this relatively simple function of Gentoo's portage to obtain software from Gentoo's repositories and build the binary package for installation and management by Entropy. This method, where Portage is only used to build a binary package for subsequent conversion to a Sabayon binary package and installation by Entropy, is safer than converting Sabayon to a hybrid source/binary system. The safety of this method stems from the fact that Portage doesn't actually install the package. 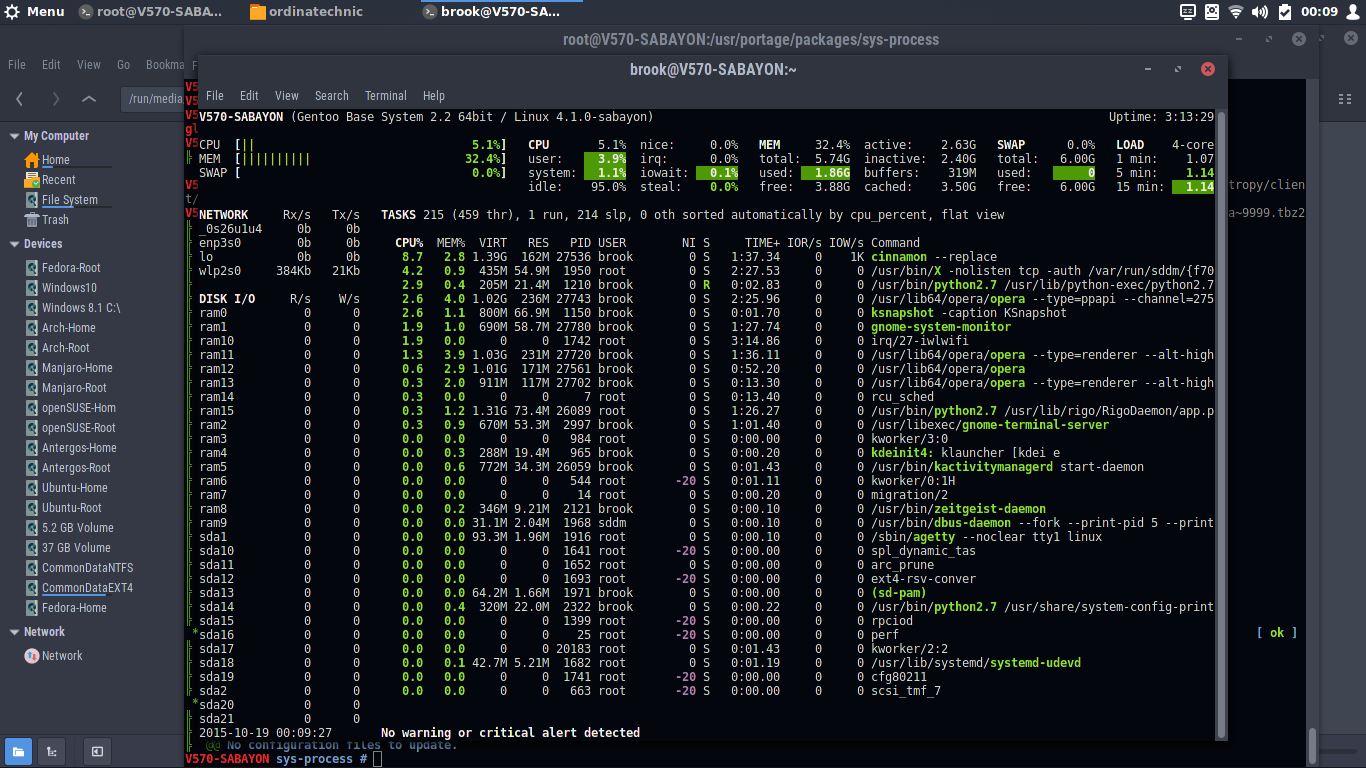 The newly built and installed glances running in GNOME Terminal.
Everything seems fine except for the atypical -- compared -- to glances found in other distributions is the DISK I/O info shows ram0 through ram15 in addition to sda blocks. An improved version or build of glances that shows I/O to RAM?

I find this bit of knowledge of Sabayon's Gentoo foundation greatly improves Sabayon's viability as a useful day to day distribution. It also shows that Sabayon is a uniquely flexible system suited more to those who are willing to learn more about its foundation.

Thanks to albfneto on the Sabyon forums for pointing out the method described in this article.