Deepin Linux is a Debian based GNU/Linux distribution from China featuring a custom desktop environment called Deepin Desktop Environment, acclaimed for its beauty and its innovative system configuration center. It includes a suite of applications developed in-house to complement the desktop environment -- Deepin File Manager, Deepin Terminal, Deepin Music, and Deepin Movies, among others. It also includes Deepin Store, a GUI Software Manager that makes it easy to browse, discover, and install software. -- a necessity for a distribution that targets users switching from other OSes.

Except for a few flaws Deepin 15.4 is well executed, and is a good distribution for those switching from Windows or those that would like an experience similar to macOS -- in terms of subjective feel if not in appearance.

However, some, like I do, may find its simplicity a hindrance to productivity, especially those used to the kind of productivity afforded by the power of a desktop environment on the other end of the simplicity/complexity spectrum like KDE Plasma.

Deepin is a Linux distribution developed by the Wuhan Deepin Technology Company of China. The goal of the company is to develop an alternative to Windows for the Chinese market that offers its users ease of use, security, and reliability for both work and entertainment.

To that end the distribution develops a Debian based distribution with a custom desktop environment called Deepin Desktop Environment -- also available in other distributions such as Arch -- that emphasizes a beautiful interface. This emphasis is immediately apparent when using the installation environment, then when facing the greeter, and even more so when logging on to the actual desktop and seeing the very high resolution, well chosen desktop backgrounds featuring amazing landscapes. Besides the desktop backgrounds, the beauty of the distribution is attained by transparency effects and very smooth and very refined animations over blurred backgrounds. 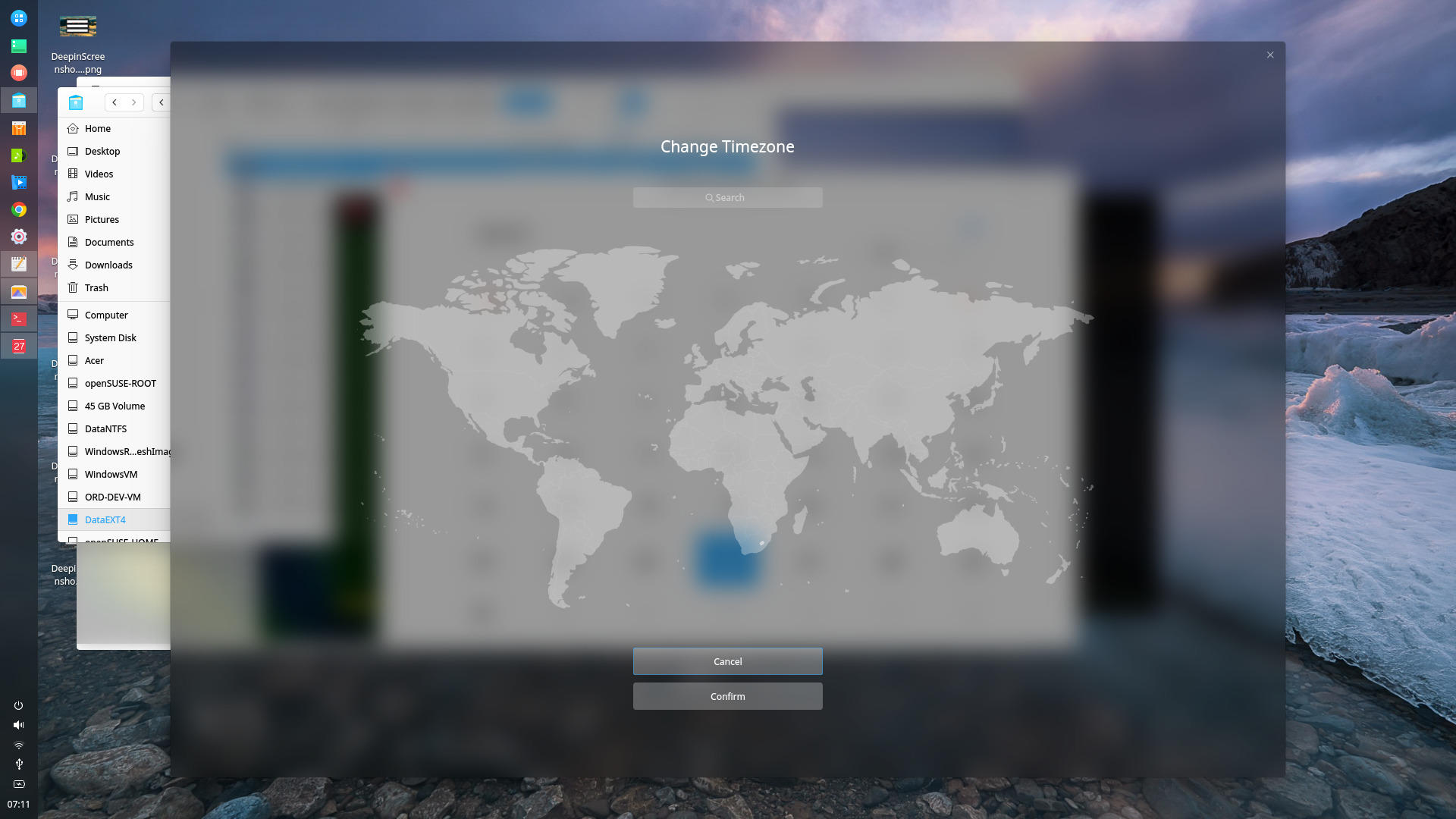 The standout feature of the desktop environment is the innovative control panel that slides out from the right edge of the desktop -- activated by a hot corner as well as a launcher -- that allows users to configure settings from one convenient location. DDE also uses a full-screen launcher activated by a hot corner or a launcher icon in the other important interface element -- a dock located at the bottom of the screen by default.

Ease of use begins with the installer which is very straightforward and effective for most users. Then, there is no work necessary after Deepin is installed to have a fully functional, fully configured, and usable system. Programs for tasks and activities in which most users will engage are installed by default. This includes the WPS Office Suite [1], Chrome Web Browser, Foxit PDF Reader, Skype, Spotify, CrossOver -- a commercial product based on Wine for running Windows programs, and Steam.

And if additional software is necessary, Deepin provides the in-house developed Deepin Store another simple and straightforward tool that should delight users migrating from Windows versions earlier than Windows 8.

Deepin also includes some innovations, most notable is the inclusion of an entry in the GRUB menu for System Setup which starts the UEFI interface; anything other than the OS and some options for booting with an older kernel, a fail-safe mode, or memtest is unusual. 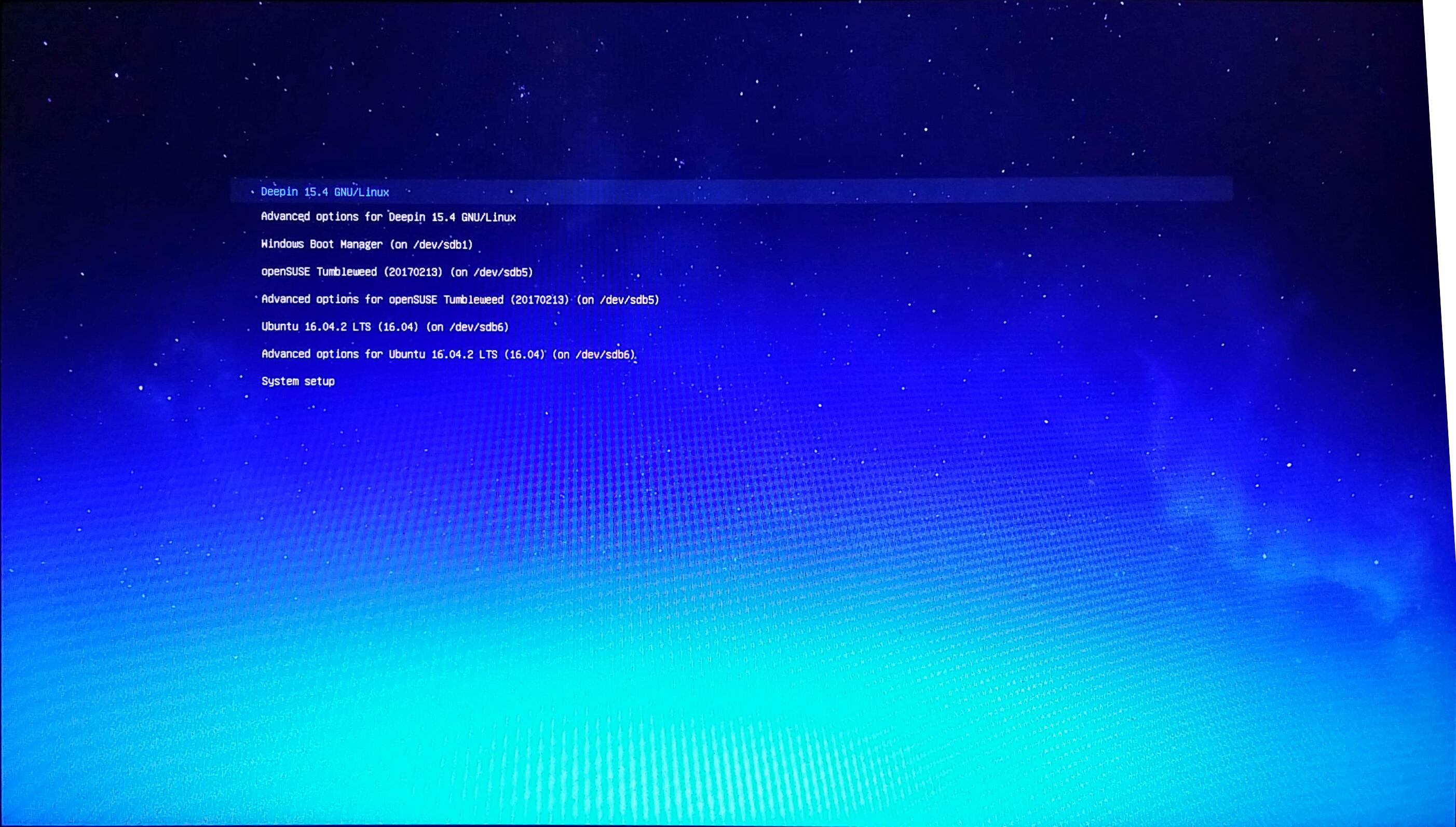 The Deepin GRUB Menu
Anything other than the OS and some options for booting with an older kernel, a fail-safe mode, or memtest is unusual in a GRUB menu in any distribution. This unusual menu entry is a helpful addition by Deepin. Although this item in the GRUB menu is unique and helpful, it is not a major innovation such as Dracut for example. It involved modifying the series of GRUB scripts found in /etc/grub.d that are used for generating the GRUB menu to include the following at /etc/grub.d/30_uefi-firmware (an excerpt of which is shown in the following code listing).

Other features that add to ease of use include:

Unfortunately, this emphasis on ease of use and beauty in the current state of the DDE is at the cost of capability, at least for users like me who expect more power and flexibility in a desktop environment.

As examples of the excessive simplicity, consider:

Although the distribution is generally well executed, it does have some minor flaws, such as:

The biggest flaw in Deepin is the omission of a properly configured firewall. Out of the box the default netfilter/iptables policies are to accept all incoming connections, accept forward requests, and accept all outgoing connections. This configuration will leave those new to Linux, which seems to be one of the segments of users that the distribution targets, vulnerable, depending on their network. The distribution should probably include and configure ufw and its graphical front end gufw by default with sensible defaults for its intended audience instead of leaving it completely open.

This lack of a properly configured firewall is a serious omission for a distribution originating in China as some outside China who want to use Deepin are concerned about its security. Some are concerned that there are hidden network connections.

The output of ss -tudpr
The first result is Deepin's CDN for its package management infrastructure and the second is the front end connection to the package management infrastructure by the Deepin Store.
I myself didn't see unusual connections, although this could be hidden by the custom kernel as discussed in thie following external YouTube video in more detail.
Can Deepin Linux be Trusted
This external video discusses whether there are hidden network connections built into Deepin Linux and whether this Linux distribution from China can be trusted.
The investigator in this YouTube video did not find any conclusive evidence of spying. Also consider as support for Deepin's trustworthiness that the company that develops Deepin is a member of the Linux foundation, and the case that one of the developers of Deepin makes for its trustworthiness in a post in this thread at Deepin's forums, reproduced below. 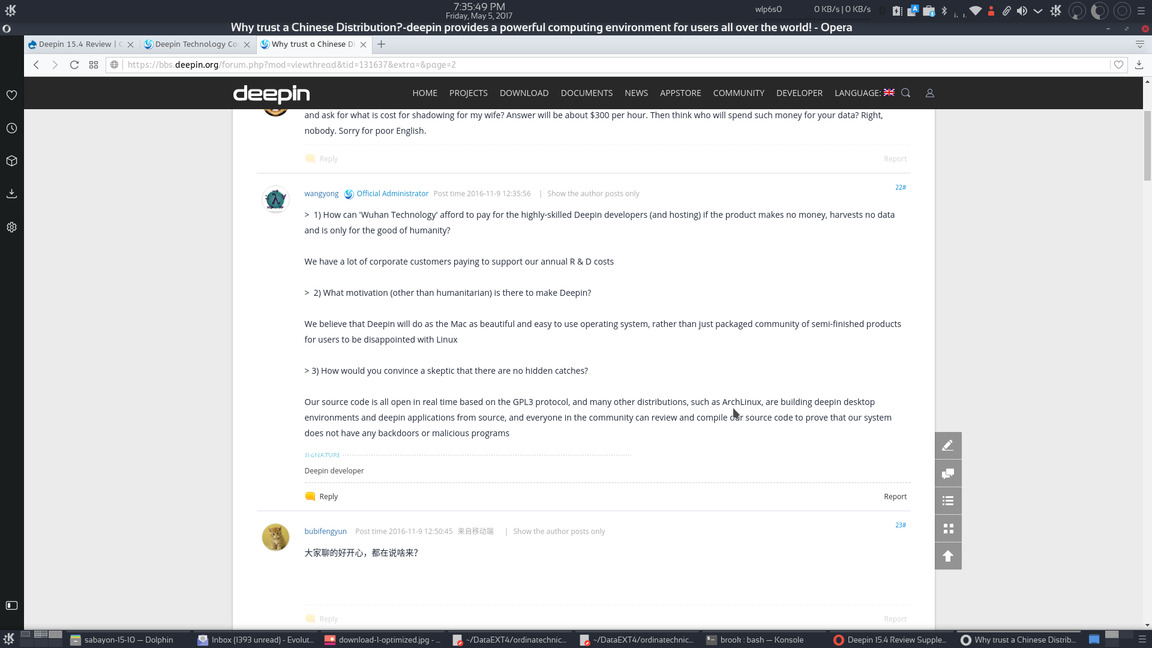 A Deepin Linux Forum Administrators Response to Questions Regarding Its Trustworthiness
But I do find the combination of the Deepin Remote Assistance and the open firewall troubling. 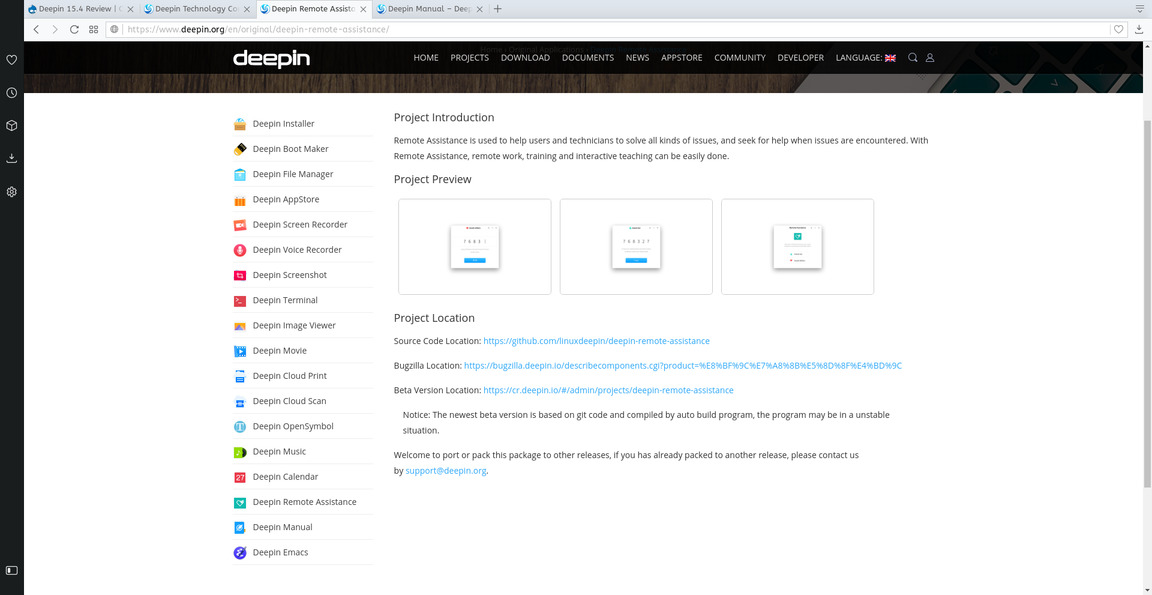 The Deepin Remote Assistance Project Page
The entire list of Deepin's Custom applications is on the left. Note Deepin Emacs. I guess the needs of advanced users are met with the Emacs operating system.
Users who like the Deepin Desktop but are concerned about its security can always use the Manjaro Deepin Community Edition, with only the loss of the Deepin Store.

The direct link displayed on the download page is very slow. After trying some of the mirrors and discovering the file size on these mirrors are different from that at the Deepin website and that the MD5 hash of these files doesn't match the MD5 sum displayed on the Deepin site, I used the SourceForge link with aria2c download manager.

Downloading Deepin
The direct link displayed on the download page is very slow. After trying some of the mirrors and discovering the file size on these mirrors are different from that at the Deepin website and that the MD5 hash of these files doesn't match the MD5 sum displayed on the Deepin site, I used the SourceForge link with aria2c download manager.

The most essential fix after installing Deepin is to change the unconfigured state of the firewall built into the kernel. The simplest way to do this is to use the ufw (Uncomplicated Firewall) program developed by Ubuntu to manage the built-in netfilter/iptables. UFW will protect most users out-of-the-box with sensible defaults for netfilter/iptables. There is a GUI available for it called gufw. Install ufw with
sudo apt install ufw.
Then enable it with
sudo ufw enable.

Other than this security flaw mitigation there isn't any essential fix but the following enhancements may be useful.

I've admired the beauty of Deepin since late 2014 when I tried the current release at that time. Although the animations and the organization and animations of the full-screen launcher and in other parts of the desktop have improved, my opinion of the distribution has not changed since then; I still find it very attractive but find the desktop environment and its default applications overly simple for my work style.

I do however find it is a very good distribution -- with some after installation attention to the lack of firewall configuration -- for new Linux users and those with the most basic and typical uses, thanks to