Mageia is a direct descendant of the defunct Mandriva Linux distribution which was previously known as Mandrake Linux. It retains and continues development of the system tools created by its predecessor, such as the urpmi CLI package manager, and the Mageia Control Center, an integrated set of modular system configuration GUI tools similar to -- but not nearly as comprehensive or suited to enterprise use -- as openSUSE's YaST.

This article reviews Mageia 7 -- released on June 30, 2019 -- which follows three beta releases and one release candidate.

Eight years after the demise of the freely available version of Mandriva Linux, and the subsequent fork of Mandriva that created it, Mageia seems to be the true descendant of Mandriva and its predecessor Mandrake. Mageia still incorporates into the distribution and maintains the tools developed by Mandrake including urpmi, the CLI package manager and Mageia Control Center, the suite of GUI system configuration utilities.

Other distributions that have the same roots, such as ROSA, also a fork of Mandriva, and OpenMandriva, actually based on ROSA, seem to have abandoned the legacy of Mandriva to varying degrees. When I reviewed ROSA I found that the Control Center, named ROSA Control Center would not launch, and many of the components would not launch separately. OpenMandriva has deprecated urpmi in favor of dnf exclusively, while Mageia retains it as default, and only offers dnf as an alternative.

Mageia Control Center and other tools developed by Mandrake then Mandriva made these distributions the among most refined and user friendly Linux distributions of their time. Mageia's decline in popularity -- according to the Distrowatch rankings -- since its inception in 2011 may be attributed to the proliferation of trendy upstart distributions which also enhance the user experience. Also as a regular release distribution that releases only when ready, sometimes with over two years between releases, combined with possibly fewer developers than newer distributions, software available on Mageia tends to become outdated between releases. But since Mageia 7 was only very recently released, it should have acceptably current -- if not the latest possible -- software for the near future.

My early impressions of Mageia were formed beginning with the download and verification process. Fist, because of the number and type of installation media that Mageia offers, then because of the very thoughtfully designed feature of the website such that after clicking the Download button, the user is immediately redirected to a page that lists the checksums of the ISO, links to GPG signatures, and copy and past-able commands to verify the integrity of the download and the authenticity of the ISO.

I was then impressed by the installer, which strikes a balance between functionality and simplicity. For example, the installer allows specifying the fstab options of partitions to be mounted in the installed system, a feature only available in the installer module of openSUSE's YaST GUI and Arch Linux. In addition to its actual design, I appreciated Mageia's continuation of the legacy of its predecessor distribution by using an original installer instead of using a standard distribution agnostic installer that is adopted by many distributions.

The installer did have one problem, however, in that selecting the non-free driver option caused such a long delay before the live environment launched I gave up on it and edited the kernel parameters to remove nokmsboot, a change which allowed the live environment to start quickly. For more on this issue and the installation, see Mageia 7 Review Supplement: Installation

On completion of installed system configuration, which occurs after first boot, the user is greeted by the Welcome to Mageia application. Although this type of application that enhances the user experience on a new installation is common these days, as far as I know, Mageia was one of the first to implement such an application as early as 2014. Since then, the welcome application has become more full featured.

The application guides the user through a step-by-step introduction of the system tools and documentation and support resources while helping to set-up additional repositories for non-free software components and installing such software as well as other common software that users may want. It truly allows a quick setup of a newly installed system, instead of presenting such an application simply for the sake of having it or simply pointing to documentation and support resources. I encountered one annoyance with this application that was the result of my own impatience: the installation of tainted applications by going directly to the Applications tab of the Welcome to Mageia application is not possible without first enabling the tainted repositories beforehand. Welcome to Mageia is designed as a guide to be followed in order of the categories at the top and not randomly picking and choosing the categories. If I had read the message in the first screen, I would have realized it states, "click on Media sources to go to the first step".

Most impressive in Mageia, and the feature that most imbues professionalism and refinement in the distribution, is the Mageia Control Center. Like YaST from openSUSE, it is a set of integrated GUI applications comprising a unified system configuration tool, appropriate for most users. The main control center application window is separated into categories -- Software Management, Hardware, Network & Internet, System, Network Sharing, Local disks, Security, and Boot. Selecting any of these categories and then any of the sub-items will open the corresponding system management component in the same window. A convenience feature of the Control Center that some users might find interesting is an optional pop-up window that shows a log of operations performed while interacting with the control center.

Click on any of the thumbnails below to see a slideshow of the screenshots.

Of these categories, the most often used will be the Software Management, which has the sub-items Install & Remove Software, Update your system, Configure updates frequency, and Configure media sources for install and update. Selecting Install & Remove Software opens the the main package management component, a tool similar to Synaptic Package Manager, DNFdragora, and YaST's software management component. Package management actions are quick and, unlike in DNFdragora, packages are displayed without a delay and navigating around the program is intuitive and efficient.

This brings me to a major problem with the package management component, which is that the Update your system sup-component of the Update your system category does not find any updates contrary to the results of the Install & Remove Software sub-component, which shows available updates. A major problem, unless there is something I haven't learned about software management using the Mageia Control Center.

Package management using the default CLI package manager urpmi works flawlessly. In one early post on this website, I criticized the multiplicity of urpmi commands, but in fact it is seems to be designed to save typing in most cases and commands are logically named -- urpm as the root of the command and the final letter indicating the function. example, urpmi aria2 installs or updates the aria2 program. Note that the above doesn't explicitly include "install" or "update".

There are also compound commands that operate on repositories instead of packages, such as urpmi.update to update a repository and urpmi.addmedia to add a repository.

That Mageia is still using urpmi as the default package manager (as well as that the Control Center hasn't been abandoned) is the reason I chose to install Mageia instead of ROSA or OpenMandriva after settling on this family of distributions. Overall I found package management to be very good in Mageia; in fact I was very impressed with the robustness in capability of the GUI program, barring on bug with regard to updating. To see urpmi in action see Mageia 7 Review Supplement: Package Management.

Other notable components of the MGC are the System components which includes tools to view and manage services, view and search system logs, manage users and groups, and configure snapshots; and the Security component, which includes tools for managing the firewall, authentication, and the security audit tool, which runs periodic audits of the system and displays a desktop notification of results. The Security component is a large part of the Mageia Control Center based on the number of tools and options available for this component.

Of the many useful system configuration tools, which are too numerous to describe, one was notable in its absence, barring an oversight on my part -- a utility to manage the hostname.

Some highlights of the MGC tools are presented below; 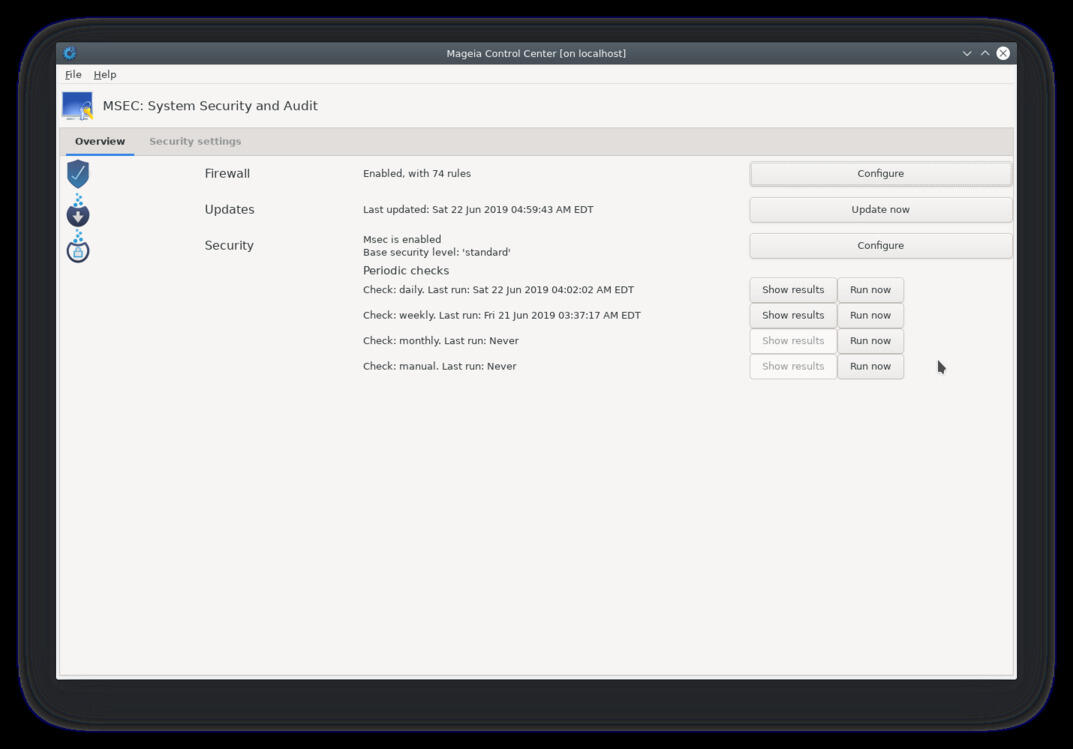 Click on any of the thumbnails below to see a slideshow of the screenshots.
Also notable is the Network Center a sub-component of the MGC's Network & Internet group. This component is used instead of Network Manager -- which is the standard in nearly all GNU/Linux distributions -- to manage network connections . The component uses systemd-network instead of the NetworkManger provided service NetworkManager.service. Also provided by the component is a system tray applet that replaces the standard network manager applet of desktop environments. Some users may not see the value of this Mageia developed tool when Network Manager has become standard, but it does provide some advanced functionality not available in Network Manager, such as network connection monitoring and accounting. Unfortunately, the network accounting feature did not work for me, perhaps because an underlying piece of software required for this functionality was not installed as it should have been. 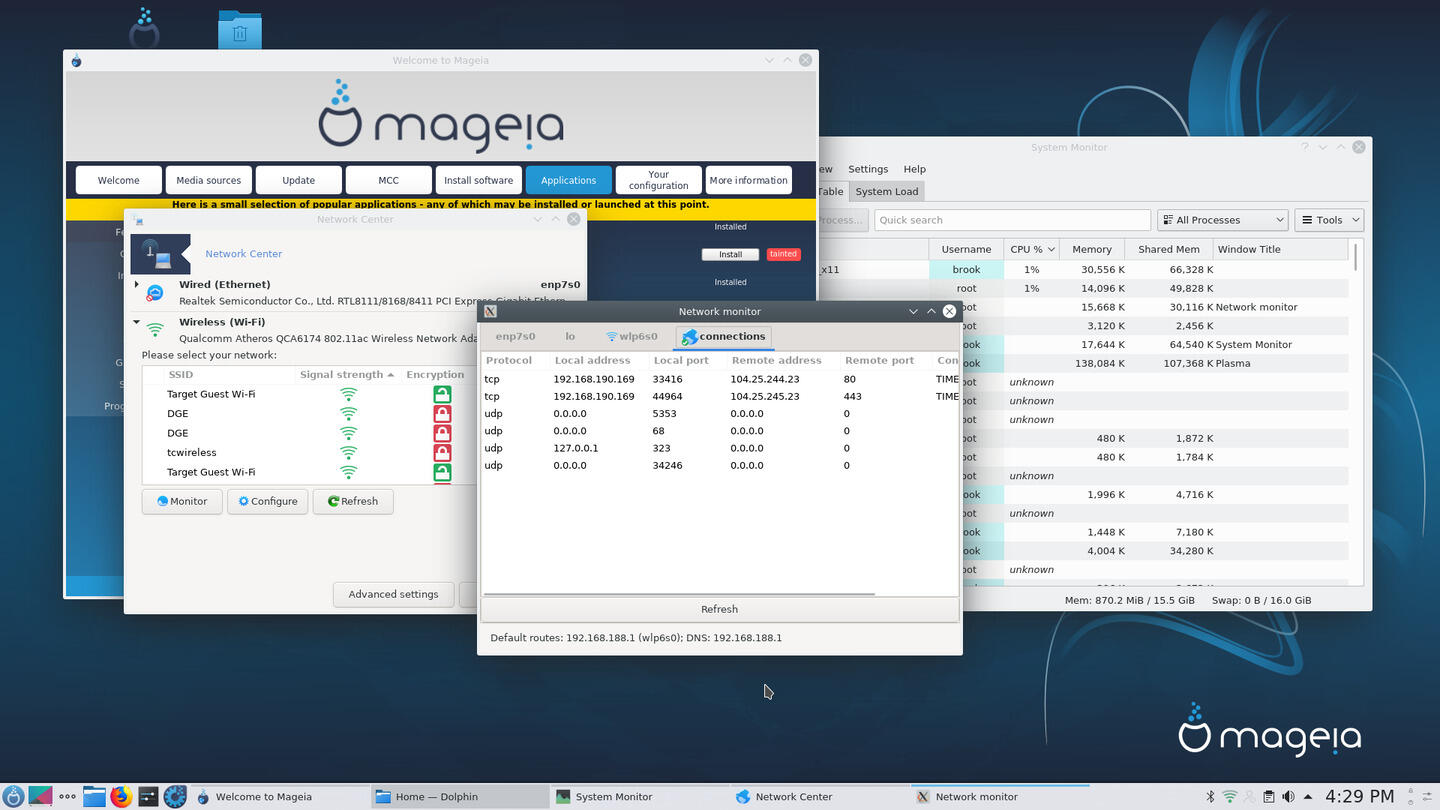 Click on any of the thumbnails below to see a slideshow of the screenshots.

While it is possible to have Network Manager also installed and Network Center configured to automatically coexist with Network Manager, it does cause complications when Network Manager is enabled, such as not allowing the MGC to start, and problems with the hostname configuration such that the hostname reverts to localhost if it is set by editing /etc/hostname and then changing the network management tool.

Some noteworthy characteristics of Mageia not previously mentioned:

For more on my experience with Mageia 7, see:

Mageia offers users a thoughtfully designed, refined, and professional distribution. Contributing to this is the Mageia Control Center a system configuration and administration utility allowing users to manage their systems simply and effectively through a suite of interrelated GUI programs accessible from a centralized interface. The distribution has the feel of a complete OS instead of a distribution that integrates various pieces from different sources and because of this, I have the impression that -- when the problems mentioned in this review are resolved -- Mageia can more legitimately use a pay what you want model more than elementaryOS.