Reflection for UNIX (for Android and iOS) is part of a set of tools, collectively referred to as Reflection, originally developed by Attachmate, now part of Micro Focus -- both former owners of SUSE (pending finalization of a sale in the case of Micro Focus) -- to facilitate connections to remote hosts and to integrate remote host applications locally. The iOS and Android app is a simple SSH client offering various terminal emulation modes, connection and identity management, supporting key handling up to RSA 4096.

This article reviews the Android Edition of the app.

Reflection for UNIX Android Edition is available on Google Play, carrying a user rating of 4.4. 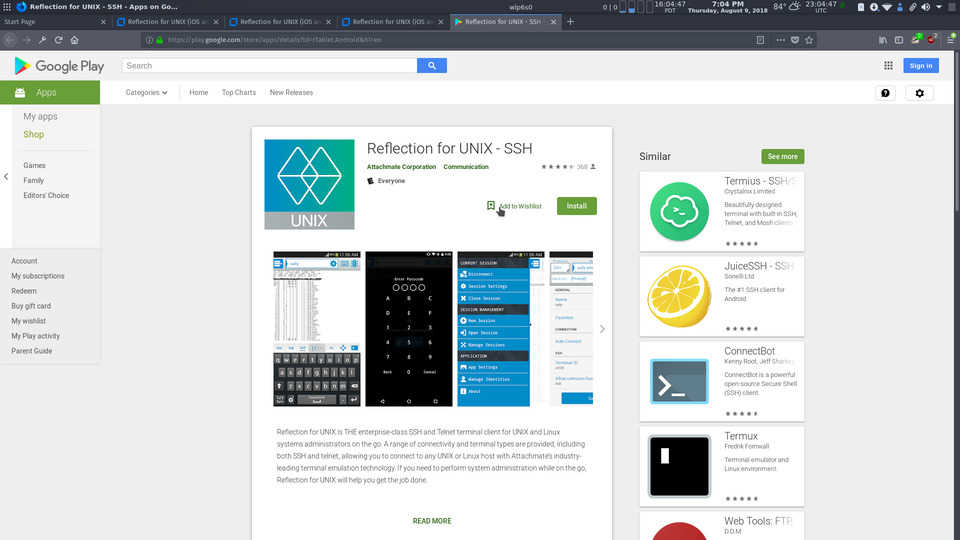 The most significant strength of Reflection for UNIX Android Edition, and the reason I use it is that, as the data sheet also claims:

Reflection for UNIX allows you to focus on real work from first launch—with no training required. Reflection’s user experience is optimized for productivity on the go, with a modern look and feel consistent with your favorite mobile devices.

Before settling on Reflection some time ago, I tried a couple of the most popular SSH clients and found that they were difficult to get started on. My initial experience with Reflection, on the other hand was the complete opposite. In my experience, Attachmate/Micro Focus's claim that the app allows "you to focus on real work from first launch" to be completely true.
Reflection for UNIX Before Configuring Identities and Connections
The various screens of the app before configuring identities, importing keys, or creating connections.

Among the other strengths of the app are the numerous settings available to customize the connection parameters and the terminal emulation. These settings can even be set per configured connection.

The user interface also incorporates components to ease managing multiple concurrent connections making it simple to switch between active connections (see the fifth and sixth images in the following set).

Connecting Via SSH
Reflection for UNIX can easily manage multiple connections.
An even greater strength is the augmentation of the keyboard with keys that allow users to easily enter characters found on a full size physical keyboard but not so easily found on a mobile software keyboard, if at all. This row of keys include Escape, Tab, |, and a Control key that stays active or "pressed" until another character is pressed, such as a C for the Control-C combination, as well as keys that display a pop-up containing other special characters. These include a key for punctuation characters, Fn keys, navigation keys, and terminal signals.

The only problem I has with this app is an error displayed in the first of the following set of screenshots when running the glances terminal system monitoring utility on the remote host, maybe caused by a lack of support for some version of curses in the terminal emulator. This error might be avoided by changing the default terminal emulator settings, something I never did, because htop worked fine as an alternative to glances.

Glances Error
Running glances results in a curses related error in the python module when using the default terminal emulator settings. Running htop, however, doesn't result in any.
Or this error was an indication of a general flaw in this app which is that it does not seem to be actively maintained or updated. Micro Focus does seem to still support it with a life cycle end that is, as yet, not determined.

Reflection for UNIX Android Edition is an easy to use app allowing users to connect to remote servers. It is filled with numerous features that mitigate the difficulty of interacting with a remote host in a terminal session running on a mobile screen without a full-sized physical keyboard. Although there are other more actively maintained SSH clients for Android available, Reflection seems to be the easiest with the typically used key available, making its limitations in most cases irrelevant.

If you have thoughts on Reflection for UNIX or any other SSH client for Android, feel free to leave a comment.