This is the second article in a series of articles on getting started with IBM's Db2 Database, a Relational Database Management System (RDBMS) that is part of a collection of data management and analysis software. The first article of the series -- Getting Started with IBM DB2 on Linux Part I: Background and Installation Preparation, discussed downloading the installation image, preparation for installation, and the available installation methods. The current article describes one of the installation methods -- the Db2 Setup GUI wizard. This method can be used on a Linux system with a fully configured desktop environment so that the wizard GUI is displayed directly on the target computer, or on a system without a desktop environment but with X Window System client software, so that the GUI is displayed on and inputs received from a remote computer. Both scenarios are discussed.

The concepts of an instance, instance owning user, and instance owning fenced user are central to the operation of Db2 Database and are discussed in Getting Started with IBM DB2 on Linux Part IV: Fundamental Concepts But to briefly describe them here, an instance is one containment level within the hierarchical containment levels of Db2 Database. The instance level containment is a separate self-contained database environment consisting of RDBMS configuration, RDBMS program execution, and RDBMS managed data. Db2 Database supports the installation of multiple copies of the software on a single computer. For each installation of the software, multiple instances that are associated with the specific copy of the database software are supported. Within the instance can be multiple databases and within the databases lower level database objects, such as tables, indexes, and views, etc.

Section Installing on Machine with a Desktop Environment Using Wizard, below, the process of installing Db2 Database in an Ubuntu 18.04 VM with a fully configured desktop environment is described. This configuration includes the underlying setup of the X Window System -- both client and server, so we can run the DB2 Setup wizard and the wizard's window will appear as any other application's window running on the machine. In Section Installing on Machine without a Desktop Environment Using Wizard, further below, the process of installing Db2 Database on the Ubuntu 18.04 VM without a desktop environment, also using the wizard is described. However, in this case, while the wizard is executed directly on the VM through an SSH connection, the wizard's GUI window will be displayed on the computer from which we have established the SSH connection to the VM. Here, the installation is performed on a VM running on a local computer (the VM host) through an SSH connection from the local computer to the VM guest (remote computer). While in the previous scenario both X Window System server and client software are available, in this case at least X Window System client software needs to be installed.

The Db2 Setup wizard executable is in the same directory as the prerequisite checking tool mentioned in the last part of this article series. We run it using the following steps directly on the target computer using its desktop environment.

Upon executing the wizard on a system with a fully configured desktop environment, such as the Kubuntu 18.04 VM, the window shown in the first image of the following set of screenshots is be displayed. The subsequent images show the following screens of the installer. Click on any of the thumbnails for a slideshow of each screen of the installer. The most notable screens of the wizard are described below. 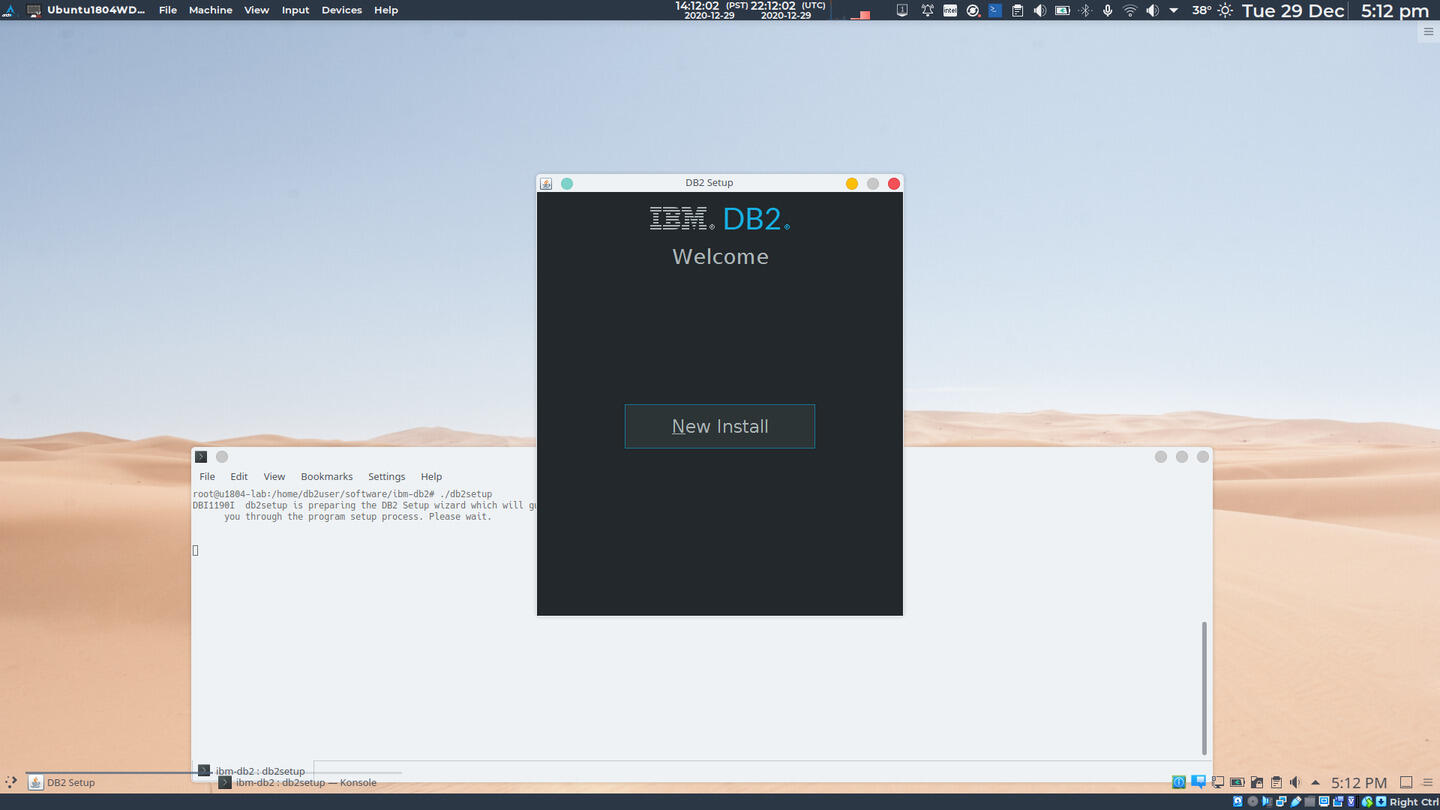 All screens and options of the GUI wizard executed on the remote computer but displayed on the local computer is exactly the same as in the previous installation on a computer with a desktop environment.

The previous section described the process of installing Db2 Database using the wizard directly on a computer with a fully configured desktop environment -- in this case the Kubuntu 18.04 implementation of KDE's Plasma. This section describes the installation process using the DB2 Setup wizard on a target computer which does not have a desktop environment by remotely connecting to it through an SSH connection but displaying and interacting with the wizard's GUI on the local computer. This method relies on the X Window System's power as a client/server network application, where applications with GUI's are X clients which display their windows on a computer with an X server. Even when programs are executed and displayed on the same computer as in the previous section, applications use the X client software to connect to and display their output and receive interaction via mouse and keyboard using the X server running on the same computer. Although the X window system is capable of this remote capability on its own, an SSH connection is used to forward the display to the local computer in order to simplify the X communication configuration as X forwarding is built into SSH. The process is described below.

Upon starting the installer wizard on the remote computer through the SSH connection, the graphical output is displayed on the local computer; the wizard's splash screen is displayed followed by a license notice, then the first screen of the wizard, as depicted by the first image in the following set of screenshots. 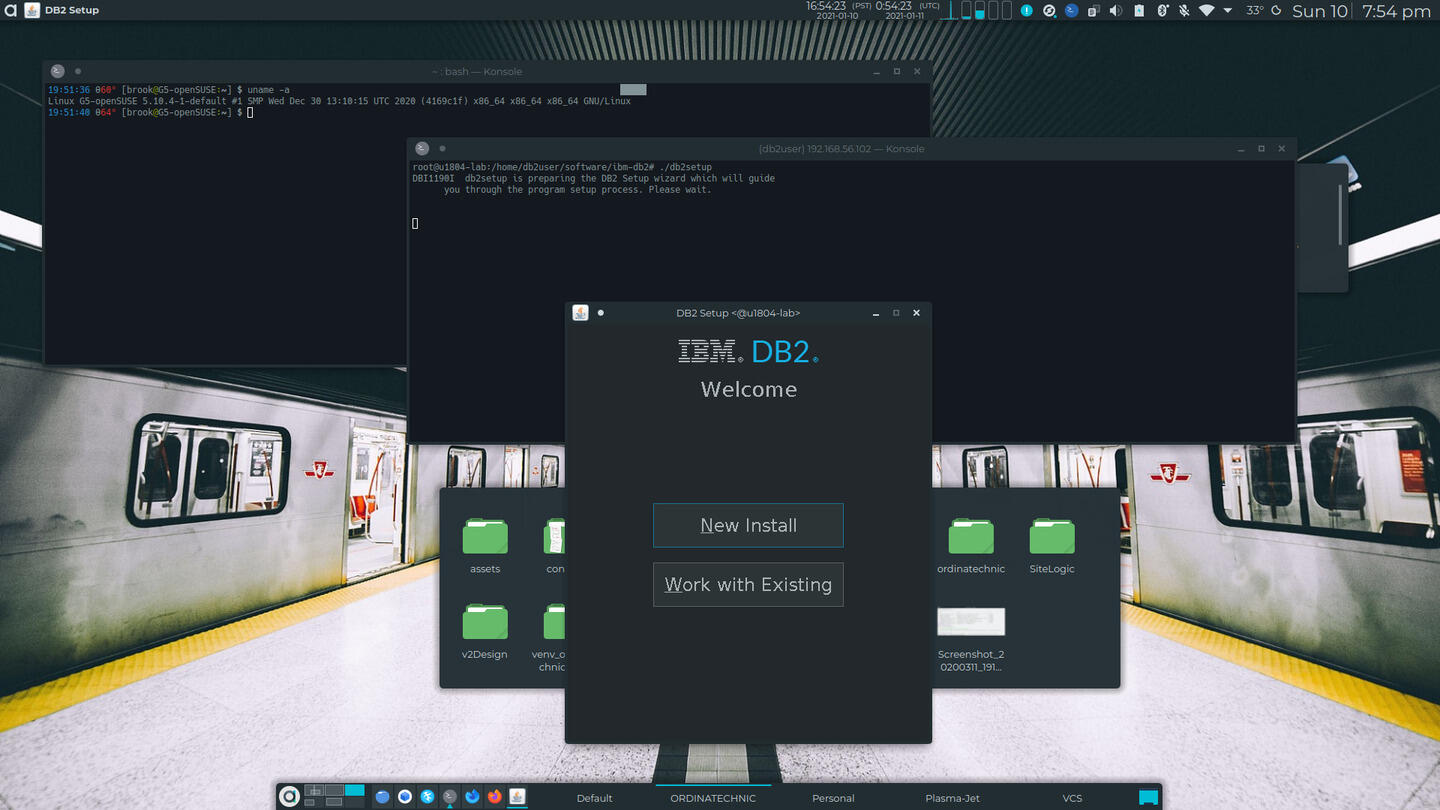 The output of the tool is shown below for a successful installation and instance creation.

The second installation can be validated similarly, by first switching to db2inst2 and running the tool as shown in the following listing.

The DB2 Setup wizard installs a copy of DB2, by default in /opt/ibm/db2 in a directory named after the version of DB2 being installed, in this case V11.5, such that the full path of the first installed copy of DB2 is at /opt/ibm/db2/V11.5. Subsequent installations of the same version of will have an underscore and a monotonically increasing two digit number appended beginning with _01, as was the case for the second installation. (For a description of installation fo multiple copies of Db2 and its containment hierarchy, see Getting Started with IBM DB2 on Linux Part IV: Fundamental Concepts. Information on the installation can be viewed with a tool included with the installation, available to all users as it is located in /usr/local/bin, a path that is set in the environment variable PATH of all users by default in Ubuntu based systems.

The installation of Db2 Database using the wizard simplifies the installation and subsequent configuration of Db2. It creates one instance and the necessary users, configuring even network communication to the instance, allowing users to immediately start using the instance. However, it can only create one instance. If multiple instances are required to be associated with an installed copy, they must be created manually or created using a response file installation. Creating instances and manual installation by extracting the payload file, using the db2_install command, and using the response file are discussed in the next part of this article series, Getting Started with IBM DB2 on Linux Part III: Manual Installation .