Using a TV As a Second Monitor with Plasma Desktop

Using a 4K TV as an external monitor is an excellent way to increase productivity when workflows require having many application windows open at once. The Plasma desktop is a very capable and flexible desktop environment for such use cases allowing users many options in configuring the working environment.

Depending on the graphics hardware there may be some complications that must be addressed. And some care must be taken to use the appropriate settings in the TV for optimal readability of documents displayed on the TV screen.

This post describes the experience and addresses these issues.

I recently purchased an LG 43" 4K TV to use as an external monitor, as my recent workflow has required me to refer to many documents, while preparing my own document in a LaTeX editor and viewing different points of the LaTeX output at the same time. This of course is a lot easier on multiple screens. This new workflow has exposed me to more of the Plasma Desktop Environment's capability and has led me to appreciate it even more.

Using the External Screen in Various Distributions
The two windows on the larger right screen are actually VMs (Solaris 11.4 and Ubuntu Mate 16.04) each taking up 21.5" diagonal of the screen. So each of these two windows by themselves would take up two individual 21.5" 1920x1080 monitors. Click on any of the thumbnails to view a slideshow of the images.

Plugging in the TV with an HDMI cable immediately brings up a graphic on the primary monitor that allows users to choose the mode of the external monitor from five options. The following image taken from the live environment of the Fedora 32 KDE Spin installation medium shows this graphic in the smaller primary screen. The choices are to:

In this particular Fedora implementation, which uses the FLOSS (Free Libre Open Source Software) Nouveau driver by default, the second screen is already active before the choice is even made. The monitor default arrangement, presumably handled by KScreen, which itself presumably uses xrandr as its back-end, aligns the top of the two monitors as shown in the above screenshot.

This default arrangement can be changed in Plasma's System Settings' Display and Monitor module on the Display Configuration page. This allows uses to manually adjust various settings for each monitor including resolution, orientation, and scale factor. I've never had to make any adjustments to any of these settings.

Plasmashell allows the configuration of panels, wallpapers, widgets, and its other elements to be flexible and very customizable. In my use case, since the two screens are not the same size, it doesn't make sense to find wallpapers that are double width or even to expand the wallpaper onto the two screens. I haven't tried this anyway since setting the wallpapers independently suits me. I also set up panels differently on the different screens.

On the primary screen I typically configure two panels, one on the top and one at the bottom. I usually add the Full Screen Dashboard, Active Window Control, Global Menu, two Digital Clock (x2), configured with detailed display, Network Monitor, System Monitor, System Tray, Weather widgets, and a simpler Split Digital Clock widget for my home time zone. On the bottom panel I usually place the Desktop Pager (for switching desktops), Icons Only Task Manager, Activity Bar (for switching Activities), and the Display Desktop widgets.

On the second screen I usually place one panel at the top with the Active Window Control, Task Manager, and Activity Bar widgets. I also place the Analog Clock widget on the desktop. As Plasma users know, all of these widgets are extremely configurable, notably the Icon Only Task Manager and the Task Manager widgets which can be configured to show tasks from only one screen, one desktop, one activity, etc. 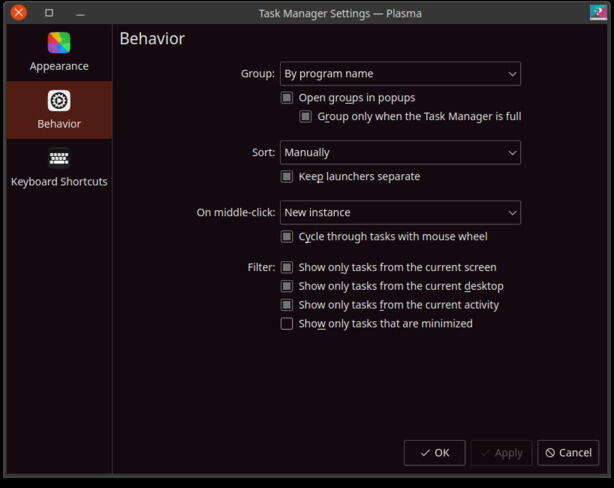 The only difficulty with configuring these elements is adding a panel to the second screen. When adding an Application Menu panel, one of the three base panel choices on which to build a customized panel, the panel is added on top of the existing panel on the first screen, requiring users to manually move it to the second screen.

Also, although I haven't experienced this on the Dell G5, on two of the distributions on my Acer V15 laptop with older Optimus hardware, when resuming from suspend, the screens are reversed such that the settings I configured for the second screen are applied to the first screen and vice versa. Also, there are some idiosyncrasies with respect to the login greeter, such that in certain cases, the greeter displayed on the primary screen is superimposed over the greeter displayed on the secondary screen in its upper left quadrant (one quadrant only because of the 4x resolution of the secondary screen compared to the primary screen). This only happens with the NVIDIA driver and not the Nouveau driver, The Best Distributions for Problematic NVIDIA Optimus Hybrid Graphicsif it works at all, and is an issue of X configuration and not Plasma. It is best to switch to the NVIDIA card, log in, then plug in the external monitor.

Using a 43" 4K TV as an external monitor has one drawback, but many advantages over a smaller external monitor or even two external monitors. The drawback is, due to the size, it is most convenient and most comfortable to view the lower left of the screen -- if it is placed to the right of the laptop. I mitigate this by placing application windows that I look at more frequently in the lower left quadrant of the TV screen; this way this area of the TV is closer to the laptop. For users with more desk space even better arrangements are possible. Another related issue is that because of the reflection of the frame area between the outer plastic pane and the actual screen inside onto the screen, the displayed content within 1 - 2 mm of the sides of the screen is difficult to see, unless looking at the area straight on.

But the advantages are numerous, in addition to value. A screen of this size and resolution is equivalent to having four 21.5" screens, each with a resolution of 1920x1080. This is significant area to display numerous windows without having to frequently switch virtual desktops.

Another advantage is that the TV can be used with multiple computers at the same time thanks to the numerous HDMI ports. And because this particular model has Bluetooth, one pair of Bluetooth headsets can be paired to the TV and the audio of multiple computers can be heard because of the routing of audio through the HDMI.

One thing to be aware of is that the TV's own settings can interfere with proper display and the appropriate settings must be selected. In one case, the preset picture modes can interfere with the display of text in PDF documents. To resolve the issue, it is best to choose the Gaming, the Expert Setting (dark room), or the Expert Setting (dark room) picture modes from the many available.

Also, another necessary setting, one I discovered after the frustration of mistakenly believing the related problem was due to X configuration, is to select the Just Scan option instead of others regarding display zoom under the Aspect Ratio group of settings. Without this, in some cases with one of the HDMI ports, the displayed desktop was cut off at the borders of the screen such that the desktop extended past the screen edges.

While I have found solutions that work for the Dell G5, on which the images in this article were taken, which indicate everything works well, graphics hardware on this laptop was not without issues that required manual intervention.

First, the FLOSS Nouveau driver has never worked on this laptop, as readers who have read distribution reviews posted over the course of the past year will know, until Fedora 32. It still doesn't seem to work in the latest Kubuntu, on which I quickly installed the proprietary NVIDIA drivers. Incidentally, Kubuntu makes switching between the integrated Intel and NVIDIA easy through the, presumably Ubuntu added, PRIME Profiles component of the NVIDIA X Server Settings utility. Problems with Nouveau have ranged from black screens to erratic behavior of application windows and mouse/touchpad pointer. Second, the HDMI port, and most likely the USB-C/Thunderbolt 3 port, which can be used as a Display Port with an adapter, are internally wired to the NVIDIA card only. So it is impossible to use this port without a driver for the NVIDIA card being active when the port is used. Additionally, it is desirable to be able to use the Intel graphics card along with its driver when the HDMI port is not in use and the laptop is not on AC power to save battery life, necessitating a graphics switching solution.

The particular TV I purchased, an LG 43UM73 is an excellent TV and a great value from Costco. Among its features:

One of the most interesting features is the Magic Remote, an ingenious device that doesn't require an infrared line of sight to control the TV, but works similarly to a Nintendo Wii controller, where the orientation of the remote relative to the TV is used to draw a pointer on the TV. Functions that don't interact with the pointer also don't need a line of sight either. The remote coupled with the WebOS operating system provides a very easy to use intuitive user interface experience.

KDE's Plasma is an excellent desktop environment making using external or multiple monitors easy with lots of flexibility in configuring the environment on the different monitors. Using a 4K TV with such a desktop environment offers many advantages for workflows that would benefit from having many application windows open at the same time.