Fedora 32 KDE Spin installation is largely straightforward and trouble free except for an issue with the installer window. Particularly impressive was that the Free and Open Source Nouveau driver used in the live environment was fully functional without the problems I have seen in the past on this laptop. Even an external monitor connected to the HDMI port did not have any problems, which is usually a problem because the port is connected to the Nvidia card.

This article, as a supplement to Fedora 32 Review [KDE Spin], describes (and shows) the installation experience.

The Fedora installation experience like the pre-installation experience is one of the best. For users that find the Anaconda installer's partitioning module too complicated an additional partitioning tool is available called blivet-gui. And while it is nowhere near as powerful as the openSUSE installer, which allows complete customization of the installed system during the installation phase, including adding entries to /etc/fstab, the Fedora installer allows users to specify the userid and groupid of the created user during installation, an uncommon feature.

The only issues I faced were that:

There was a big plus however in that the graphics setup in the live environment was excellent.

Booting the live ISO brings up a GRUB menu with two options, one for checking the installation medium image and starting the live environment; and another to just start the live environment. I selected the first without pressing e and editing the kernel command line options to include "nomodeset", something that has always been required when using many distributions' live environments on this Dell G5 with Optimus graphics consisting of an integrated Intel UHD630 and a discrete Nvidia GTX-1050 Ti graphics cards. To my surprise, there was none of the erratic behavior that typically occurs when on this laptop when the open source drivers are loaded on this laptop. I decided to plug in a recently acquired 43" 4K TV to the HDMI port to see what would happen. ( Before this external monitor I had always installed the proprietary graphics because of the problems with Nouveau and Bumblebee to keep the Nvidia card off and simply use the Intel card all the time. I recently learned that the HDMI port on the Dell G5 is internally wired to the Nvidia card which has forced me to install the Nvidia graphics without Bumblebee.)

I was pleasantly surprised when the external screen activated and the display expanded to the second screen.

As is the case in the installed system, some functionality is missing due to Fedora's strict adherence to its policy of only providing Free and Open Source Software. Because of this, Simple Screen Recorder, which I normally use to record installations from a live environment, was not available for installation into the live environment from the official repositories. 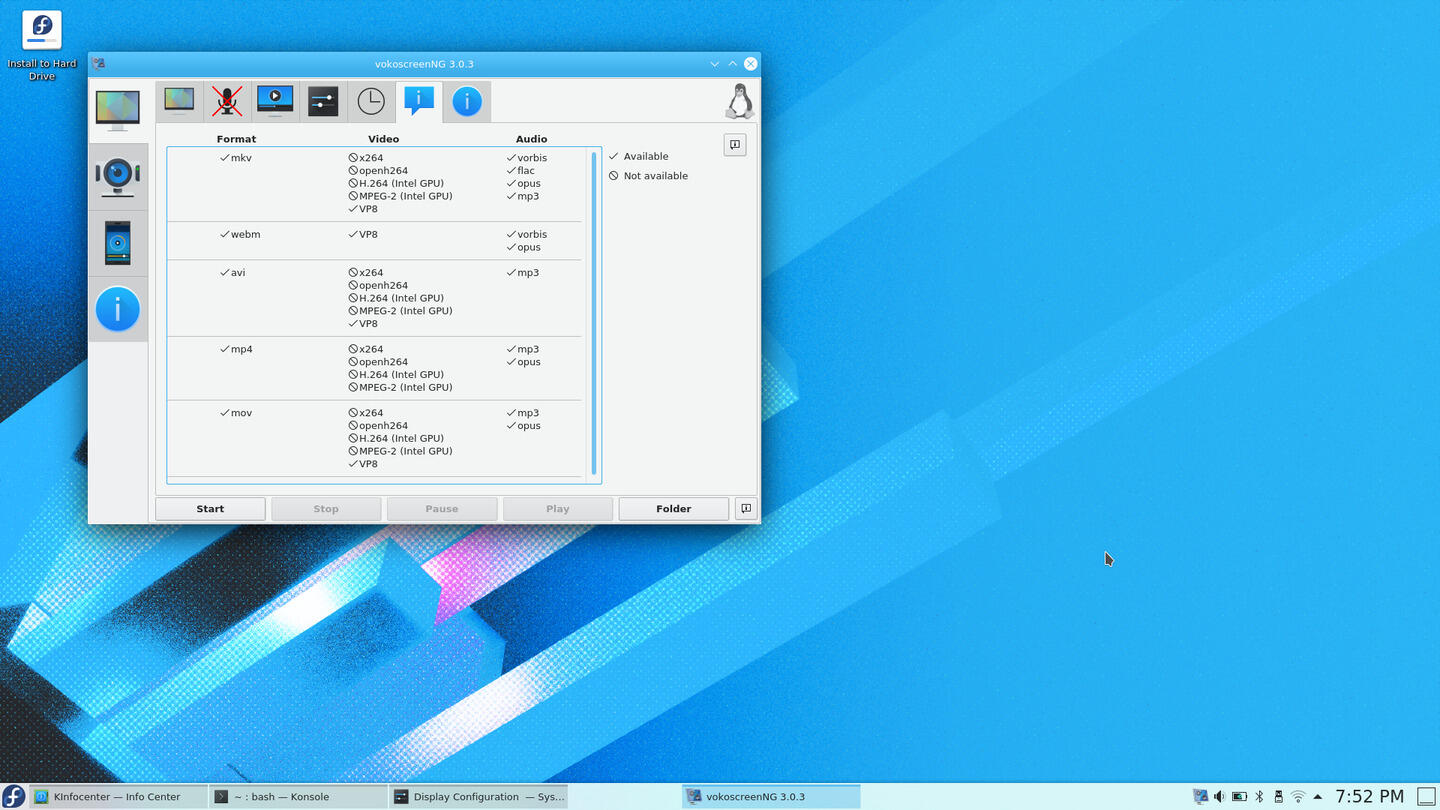 Instead I installed VokoScreen-NG which was available, but the version available from Fedora only includes open source codecs. (The lack of non FOSS software is easily correctable after installation thanks to RPMFusion.)

The video below shows the complete installation process I used. I had prepared partitions for the / and /home. Note the previously mentioned problem with the installer window at about 3:00. You may notice that after I restarted the installer, and confirmed my installation configuration the actual copying of software took very little time. The majority of time taken by the installation was the installation of GRUB and its probing of other partitions on the disks. I experienced the same behavior in the installation of Kubuntu 20.04 and have noticed it during updates of Manjaro which involve an update of GRUB taking twenty minutes for the GRUB update portion of the package update. Some timestamps of the video:

As usual, the actual installation experience was good, the Anaconda window issue notwithstanding. The Nouveau driver working out-of-the box is a new improvement in Fedora's live environment.