Kubuntu 20.04 LTS, possibly due to an error on my part in selecting the correct GRUB menu option when I started the live environment, required a fix with respect to the NVIDIA graphics card. This article describes this fix and enhancements I made during my trial of the distribution documented in Kubuntu 20.04 LTS Review.

Kubuntu 20.04 LTS required one essential post-installation fix in my case. This was that I had to install the appropriate packages to install the proprietary NVIDIA drivers. Once these were installed I was very impressed with the functionality provided. Unfortunately, it took several attempts to get to the point of installing the correct meta package that installs the driver and the associated utilities.

In the past on Ubuntu and the Voyager 19.10 converted to Kubuntu I had used the Additional Drivers tab of the Software & Updates tool to install the available proprietary drivers without any issues. This time I first attempted to use something similar I had seen in Discover, shown below. 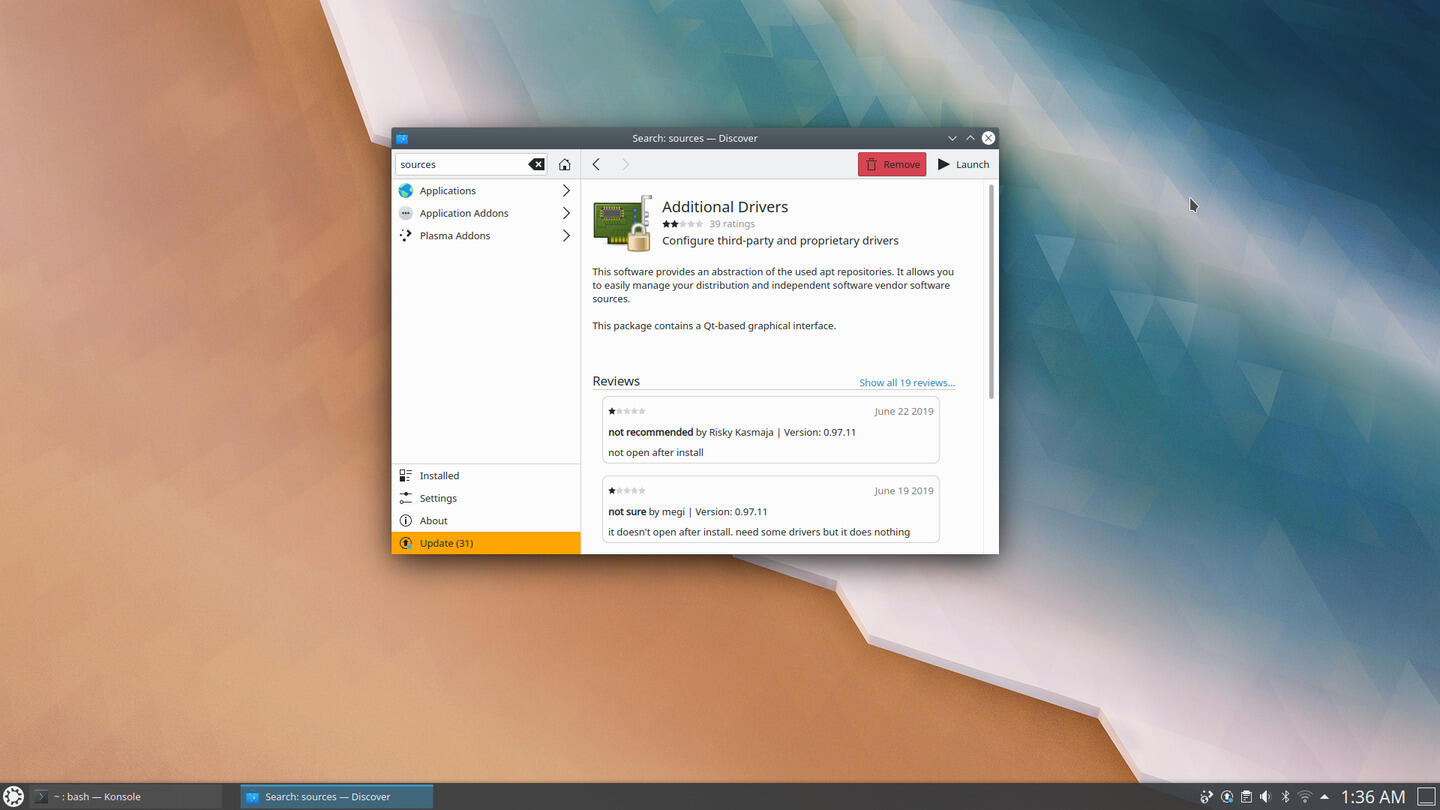 After installation this program failed to launch. In hindsight, this may be because it may simply be a front end to some other program perhaps Additional Drivers tab of the Software & Updates tool itself. I then installed the Software & Updates tool which, if I remember correctly, didn't do anything. What eventually provided full functionality of the NVIDIA card was installing the appropriate meta package in a terminal.

Finally I installed the meta package nvidia-driver-440 with: 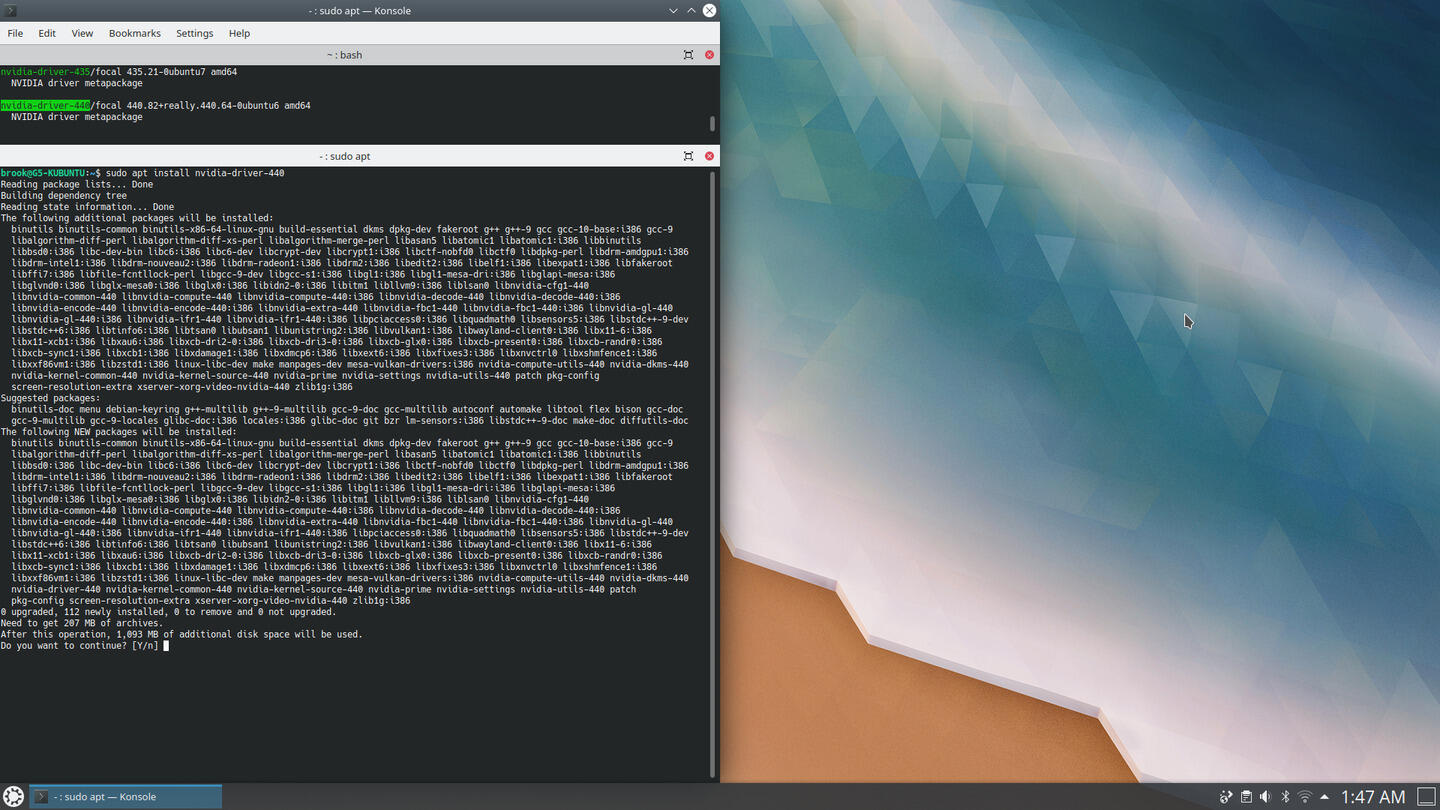 This installed the driver kernel module as well NVIDIA X Server Settings and what is presumably Ubuntu's addition to it, PRIME Profiles which allows switching between the graphics cards or setting a hybrid mode where the NVIDIA card is used only on demand. 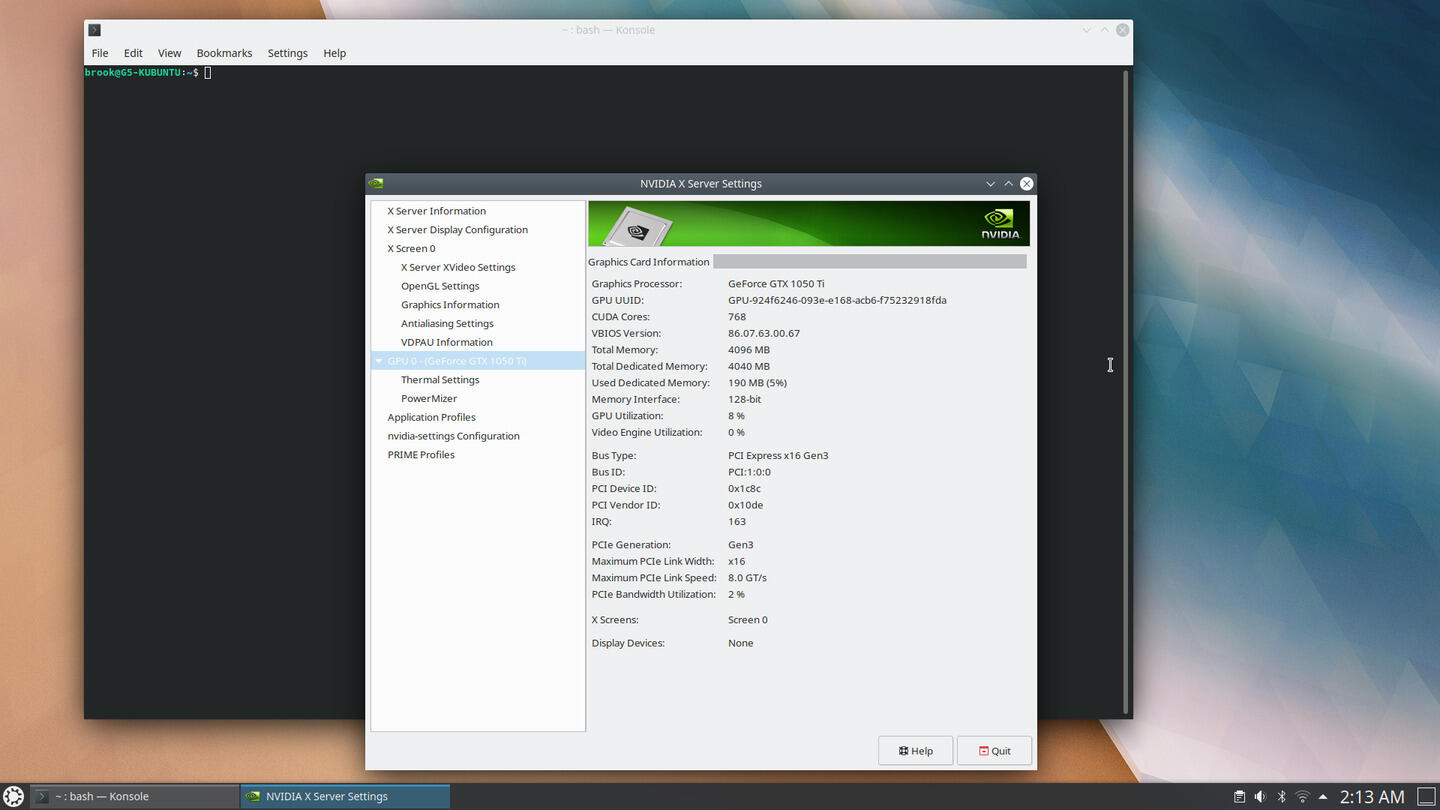 I chose to install tlp to further extend the excellent battery life I have been getting since I replaced the second hard drive on the Dell G5 with a SATA SSD -- complementing the NVMe SSD storage device. However since tlp in its default configuration may interfere with power management of the graphics card I blacklisted the two graphics cards in its configuration.

I chose to keep the example line:

instead of modifying it and added:

Enhancements to distributions are a matter of personal preference. An enhancement for me in the case of Ubuntu was not to simply select theme elements I liked, but to make Plasma look like Unity 7. I first removed the default panel and added two panels, one at the top with Active Window Control, Global Menu, and System Tray widgets, among others, and another panel to the left with the Icons Only Task Manager widget to simulate the Ubuntu dock. I also installed the YaruKdeDark Global Theme and modified its Colors component to be similar to Unity's color scheme. 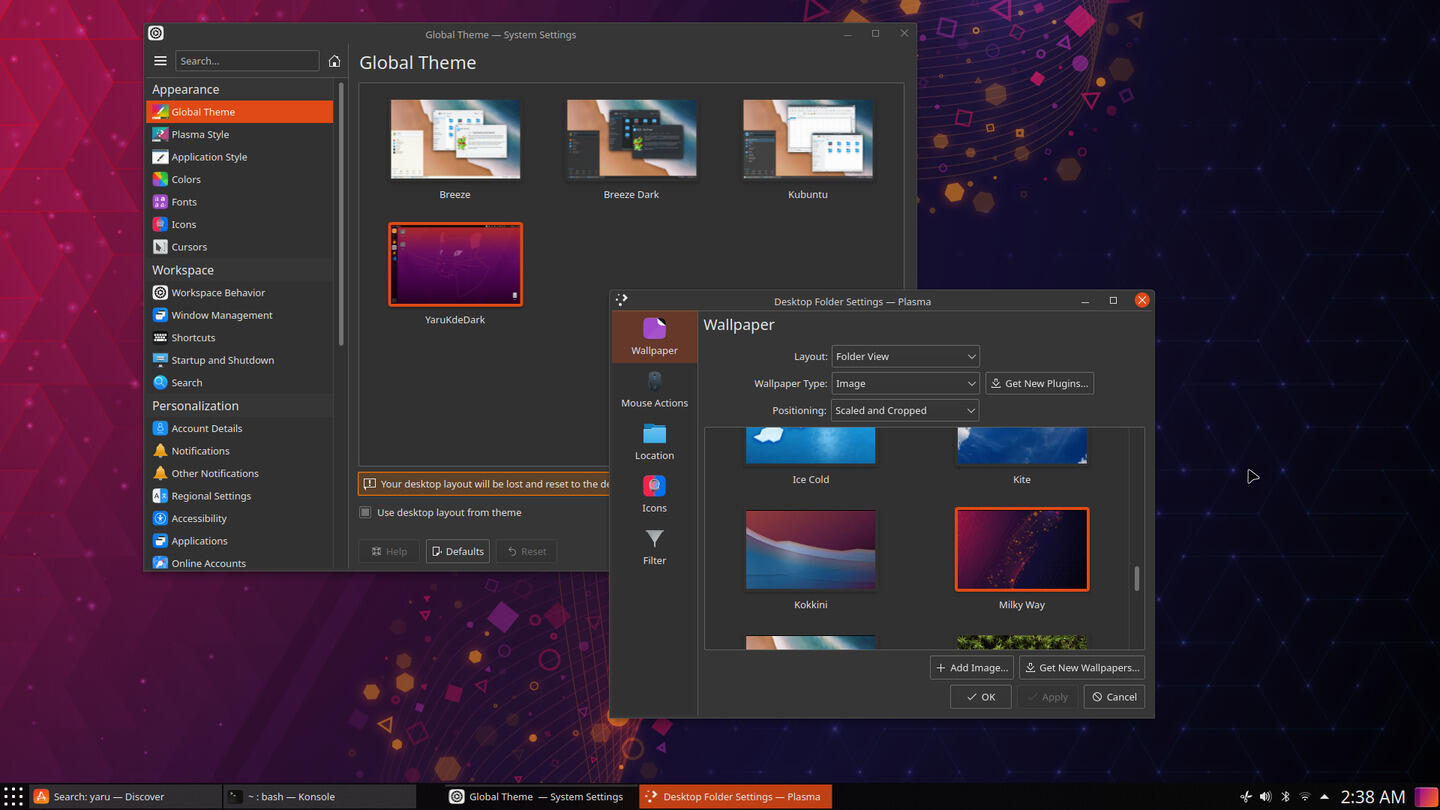 The YaruKdeDark Global Theme
I used this as a basis for customizing the color scheme from the dark brownish gray to something similar to the Unity aubergine.

Below is the almost completely customized theme. 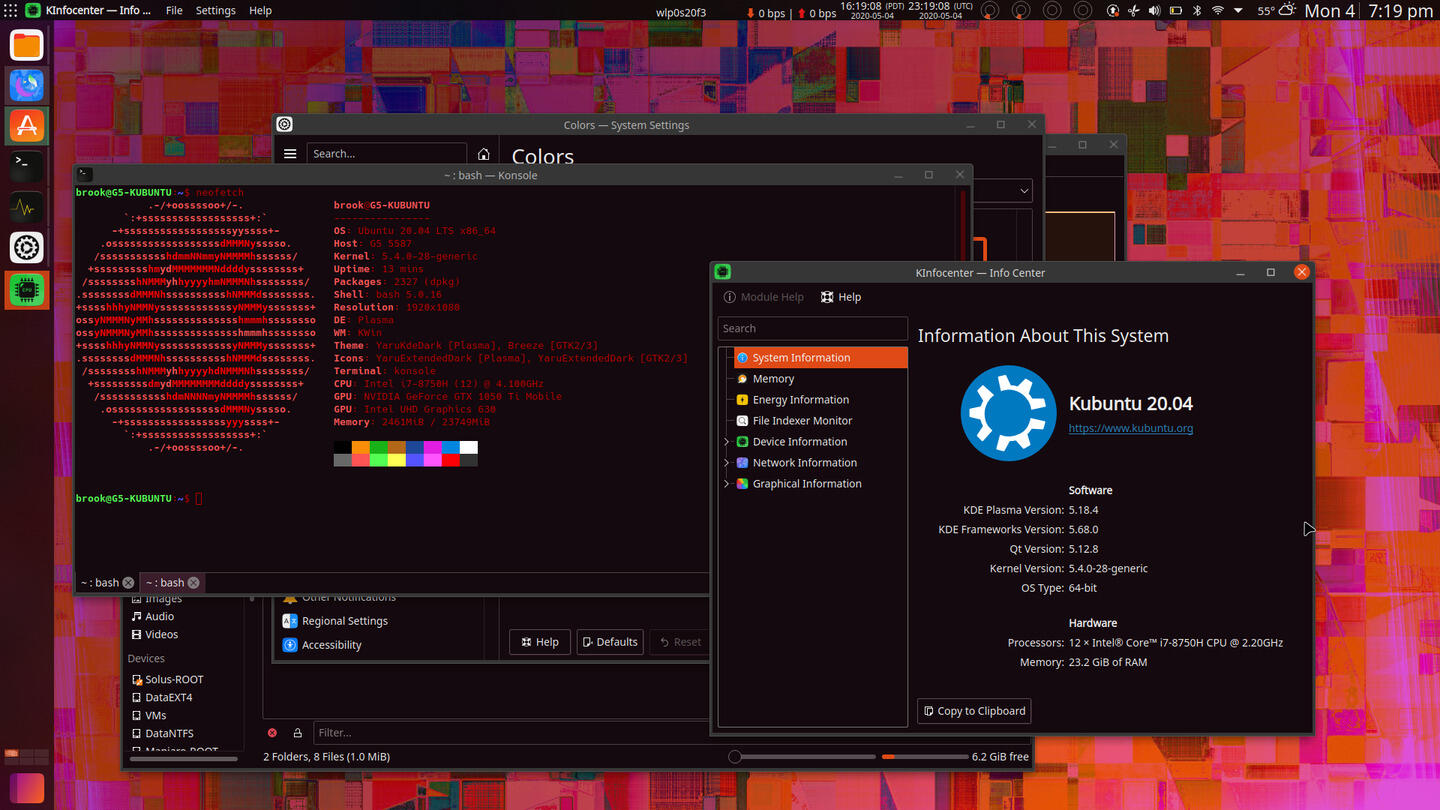 I may have started the inappropriate live environment GRUB option, causing the NVIDIA drivers to not be installed. In any case installing the nvidia-driver-440 in a terminal fixed any of the issues I had.